India is known as the Vedic land and is a nation of numerous religions such as Hinduism, Christianity, Islam, Sikhism, Jainism, Buddhism and many more. Indian nation is the best illustration for unity in diversity. Festivals are an integral part of Indian culture where people come together and celebrate on a grand scale. Also Indian festivals are amazing to look out for. They are colourful, playful and are also filled with lots of traditions and emotions. If you want to know about more about Indian festivals, here are 11 most important festivals of India. 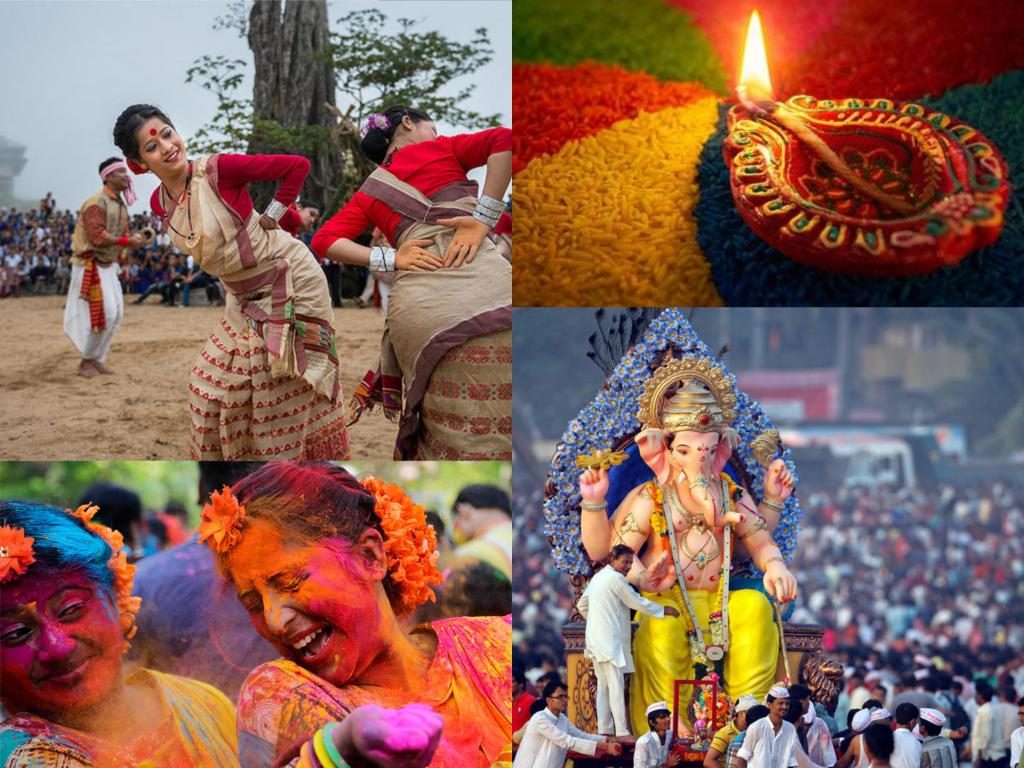 Diwali is the festival of lights which is celebrated with lot of vigor and enthusiasm. It has a back story of Lord Sree Krishna killing Narakasura. People decorate their houses with lights, clay lamps, candles and exchange gifts.

Holi is the festival of colours. People enjoy this festival irrespective of religion. The merrymakers wish each other Happy Holi by applying coloured powder on each other’s cheeks. Other highlights of this festival are savouries, dance, music and food.

Dussehra is commemorated as the day Lord Rama attained victory over Ravana. This festival symbolized the victory of good over evil. As a part of celebration, symbolic statues of Ravana are built and placed at different avenues to be burnt by an arrow of fire.

Ramadan is one of the major festivals of India. It is celebrated by every Muslim sect of the Indian demographic. Ramadan is the holiest month for Muslims and is used as the period for fasting, prayer, introspection and religious contemplation. At the end of fasting month, Muslims break their fast and gather together for prayers and celebration.

Not only in India, Christmas is celebrated all over the world. Most parts of India are lit in the month of December as a gesture of celebration of the birth of Jesus Christ. This festival marks the religious and cultural celebrations for Christians. Christmas is usually celebrated by decorating the Christmas tree and exchanging gifts.

One festival that is enjoyed a lot by all ages in India is Ganesh Chaturthi. It revels the homecoming of Lord Ganesh. This 10 day long festival is initiated by installing the idol of Lord Ganesh at home. Idol of Lord Ganesh is installed to bless the house and its members with happiness and prosperity. On 11th day the idol is taken with much celebration and show to be immersed in water.

This festival celebrates the birth of the mighty and the mischievous Lord Krishna. Celebrations at Mathurea and Vrindavan are very popular for Janmashtami. On this day, people visit temples, pray, dance and sing bhajana (hymns). Often small children are dressed up like Lord Krishna on this day.

Baisakhi is one of the major festival for Sikhs and is celebrated on the 13th of April each year. This festival is celebrated after the harvest of Rabi crops and is heartily celebrated among the farming community of Punjab. It is celebrated by performing folk dances of the state and it also has a great religious significance too.

Onam is one of the biggest festival in Kerala state. Just like Baisakhi, Onam is celebrated after the harvest by all communities of the state. Onam festival lasts from 4-10 days with elaborate feasts, songs, folk songs, energetic games, elegant dances, elephants, boats and flowers. This festival is really feast to the eyes.

This festival has a great religious significance and is an annual event in honour of the great Lord Shiva. It is celebrated on the 13th or 14th day of the lunar month Maagha or Phalguna. Maha Shivratri celebrations include day long and night long fast by devotees, performing rituals and offering prayers to the traditional Mahashivalingam.

This festival is in the month of January. It is also celebrated after the harvest by Telugu speaking people of India. Mostly people of Andhra Pradesh celebrate this festival. Makar Sankranthi marks the end of an inauspicious period and start of the auspicious month.

Bihu is celebrated in the North East of India. It is the harvest festival of Assam. Young men and women wear their traditional clothes and perform Bihu dance in the village fields and courtyards during the month-long celebrations.