Aggressive behavior such as hitting, biting, and fighting? Does your child often lose control of himself and burst into violent rages? You may be getting exhausted at your child’s destructive behaviour. If so, you are not the only parent out there. There are several parents battling violent rages of their children and looking for solution to heal them effectively.

Violent rages in children especially adolescents is a common phenomenon and seen in almost every household nowadays. This is an immediate and often intense reaction to something they don’t like or unwilling to do. In many cases, violet rages may just be a part of adolescent tantrums, whereas in many cases it may be due to psychological problems such as bipolar disorder and attention deficit hyperactivity disorder.

Read More: 4 Reasons Why a Father is Important for Early Development in Children

Signs of Anger Issues in Children

Read More: 11 Ways to Make Your Child Talk About School

1} Understand what he is feeling

Once your child has calmed down after a big blow or tantrum, speak to him softly about it. Ask him what was troubling him and try to understand the reason. Try to listen to his feelings rather than reasoning it out with him. Do not let the tone of your voice make him feel you are accusing him for what he is done. Try to understand the reason of his outbursts and feelings behind the anger.

If your child does not know to be assertive about his opinions in a non-violent way, then it is high time you teach him. Teach him more gentle ways to react to a situation. Pretend play or role-play a hypothetical situation and show him how he should have behaved instead. This will help him understand other ways to react to a situation and also help him control his violent rages. 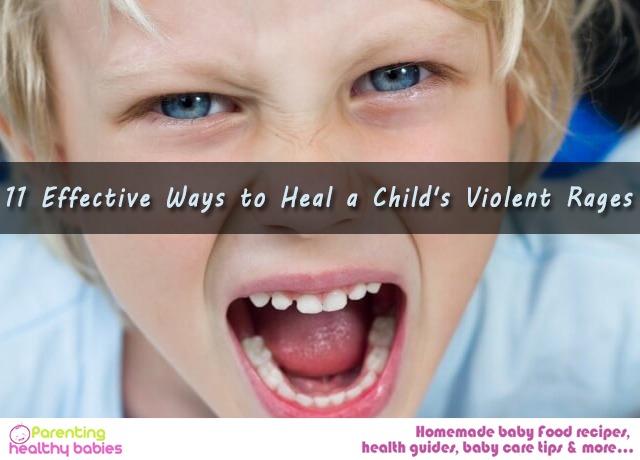 Children really have no idea what they are doing and understand very little the impact their attitude and tantrums will have on another person. If your child is aggressive and consistently bites, hits, or screams to show his anger, do not do the same to teach him a lesson. Instead ask him how he would feel if someone else did the same to him. This would help him empathise with others and understand the impact of his anger.

4} Do not hit your child

Remember hitting your child back in return of his violent behaviour is not the solution. It is not going to bring him back in control. It may only make him turn more violent later. Exercising self-control yourself if the best way to teach your child self-control.

Most of us parents fall prey and weak to our children’s tantrums and end up doing what they want us to. But this is only going to make them get their way. Your child will continue to think he can get his way out by being aggressive and showing his violent rages. Do not tolerate violent behaviour in any form. Make a strict rule that no aggressiveness will be tolerated within the house.

Children are like wet cement. They do what they see. Most of us don’t realise that our children pick up things from our own habits. Your child may be getting angry because he sees you getting angry. The first step to control and heal your child’s violent rages is to control and manage your own anger. Remember to practice what you preach.

Read More: 10 Notable Signs of Autism in a Child

Children can also pick up behavioural habits from what they see on television, mobile phones, and computer. If you observe him watching violent stuff on television or social media, immediately shut him down and limit his exposure to these unpleasant things. Explain the ill-effects in a gentle way and get him distracted into other healthy activities like reading books and playing sports.

Getting angry frequently is a common thing in adolescence. Due to raging hormonal changes, children do not understand how to express themselves. Kindly suggest alternative behavioural methods to your child to express his opinions.

9} Explain the consequences of aggressive behaviour

Do not tell your child not to get angry. Anger is natural and should not be suppressed. Instead calmly make your child understand the consequences of his aggressive behaviour. Tell him gently how it will hurt his loved ones and how it is going to harm him as well in the future.

Often, things get messy with your child when you too react to his abuse. Ignorance is the best policy. If your child is hitting you or verbally abusing you and calling you names, do not respond to it. Simply leave the room and return when he has calmed down. Do not yell back in response as it is only going to make him worse.

Last, but not the least if the above mentioned techniques do not work, it is time to try out some anger management techniques. These will help him effectively control his anger and make him feel better about the situation.

11 Do’s and Don’ts for Caring During Orthodontic Treatment for Your...