Birthmarks are significant marks or rather say blemishes on our body which appear during birth time or shortly after that. Birthmarks are not mandatory on all kids, the appearance of birthmarks is found least in Asians.

Birthmarks can either be vascular or pigmented. Vascular birthmarks are generally red, pink or purple blemish which appear mainly due to the presence of abnormal blood vessels under the skin. Pigmented birthmarks are usually brown spots formed by clustering of the pigment cells.

Researchers have not been able to figure out the reason for the appearance of birthmarks, but they do claim that vascular birthmarks are not inherited. The over-accumulation of cells that make up the lining of the baby’s blood vessels is considered to be the prime reason for development of strawberry marks. Some scientists also believe that some part of the placenta may have been present in the developing embryo during the early stages of pregnancy. Moreover, if the nerves that control widening and narrowing of capillaries are damaged, it can lead to port wine stains. Salmon patches are a result of concentration of capillaries under the skin. It is also said that the proteins produced by placenta during pregnancy may also be a reason for the appearance of birthmarks. 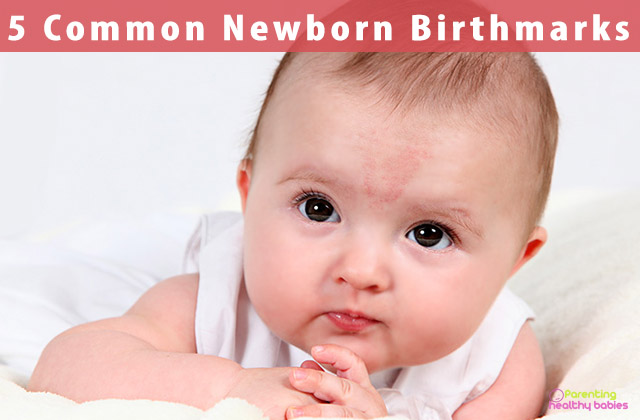 Now let’s look into some common birthmarks that appears in newborn babies.

This a flat and pigmented birthmark which gets is name from the light brown color it has. It is a French word which actually means “coffee with milk”, interesting!  isn’t it?  It is a result of the  accumulation of pigment producing melanocytes. These marks are generally permanent marks and there are chances that it may grow in number or in size as time passes on. These spots are harmless in most of the cases but there are chances that it can be associated with symptoms of diseases such as neurofibromatosis type 1 and McCune–Albright syndrome. These problems can turn out to be fatal for the child, so it must be properly diagnosed. The most appropriate treatment for such birthmarks is lasers, but there are chances for this mark to come back even after treatment.

Is your baby having blue-gray marks on his/ her body? Well, then it is nothing else but Mongolian spots. They generally appear on the lower back or the buttocks and  it is more significant in people with darker skin complexion. These may look like some kind of bruise to you but, these birthmarks are completely harmless and in most cases they disappear after four years of age, sometimes they remain till puberty and in the rarest of rare cases they exist till adulthood. They are primarily caused by the pigments of the skin that couldn’t make it to the top layer of skin when the baby’s skin was formed. These flat, 2-8 cm wide birthmarks are also called congenital dermal melanocytosis. Since, it is due to the melanin that was suppressed under the skin during childbirth, it is harmless as melanin is just a component of skin formation.

Well, do not panic when you see an accumulation of blood vessels on the baby’s body. It can be a birthmark as well. Hemangiomas is a noncancerous  growth of blood vessels that usually grows for a short period of time and eventually subsides without causing any serious problem. But, it can open, bleed or ulcerate. This is indeed going to be a painful experience for your kid. This birthmark appears generally due to the abnormalities of the spinal cord or the central nervous system. Internal hemangiomas can affect the internal organs of the baby, such as the liver, the gastrointestinal system, the respiratory system and the brain as well. They can also be a result of some proteins produced by the placenta during pregnancy. Corticosteroid medication, Beta-blockers, Laser treatment, Medicated gel and surgery are the possible treatments for this birthmark, if it turns out to be fatal for the child.

Some birthmarks are just a blessing, this is one of them. It is believed that this birthmark adds a charismatic effect in the person’s personality. This birthmark is a streak of grey hairs that is generally found in the front part of the hairline, that is the left side or the right side of the area where the hairline and the forehead meet . This is considered to be a  hereditary birthmark. It is also called witch’s streak and you can also find this streak in other family members. So, this is frankly the most harmless and popular birthmark.

This birthmark gets its name from the color of the stain, that is, purple or red(port wine is a red wine famous in Portugal). It is the discolouration to the skin caused by abnormality in the in vascular cells. The capillaries start aggregating abnormally and thus leads to port wine syain.It is also called fireworks. These marks can get darker if they are not treated on time. The situation is more delicate if they appear near the eyes. This birthmark may not be very fatal unless it becomes a reason for brain abnormality, that is, Sturge – Weber syndrome.

Generally birthmarks do not pose any threat for our health, but some complications may arise. Strawberry marks can turn out to be open sour and prone to infections. The melanocytic nevi birthmark may turn out to be malignant cancer. You may suffer from glaucoma due to the presence of port wine stain around the eyes and many more. So, parents need to pay attention if there is any sign of infection or any problem they should seek medical attention immediately. The probable treatment for birthmarks is Corticosteroids, Interferon alfa-12, Laser therapy or surgery. The treatment options are primarily dependent on factors such as severity and location of the birthmark. Birthmarks are considered harmless but parents need to be aware if it is posing any problem in  sight, feeding, hearing, or breathing of the child and get the appropriate treatment done.

7 Things to Consider Before Taking Medication while Breastfeeding