Chickenpox or Varicella Zoster is a virus that usually strikes children. It is identified by red and itchy blisters or bumps that appear in different parts of the body. Normally, individuals experience chickenpox only once in their lifetime.

Who is at risk from chickenpox?

Chickenpox is usually experienced in childhood. It is mild and rarely has any complications. Once a child is infected with chickenpox, he or she develops immunity to it, so hardly ever would an individual experience it again. However, it can be severe among adults.

Those at greater risk of serious complications from chickenpox include people whose immune systems have been weakened by illnesses like HIV and cancer or strong treatments such as chemotherapy; pregnant women as it can affect the foetus if she catches chickenpox. It can lead to serious birth defects and severe chickenpox in the baby at birth. 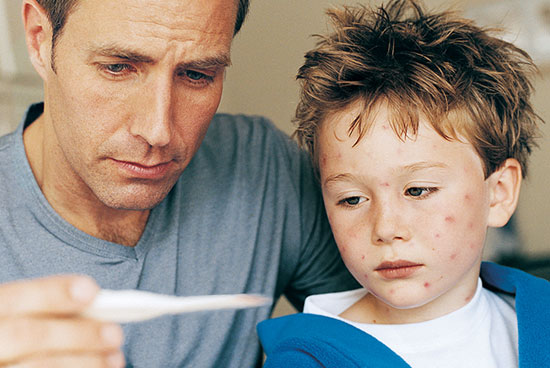 How does chickenpox spread?

Infected people can spread the disease to those who have never had it. It is carried in the air when an infected person coughs or sneezes, or if he touches chickenpox blisters or inhales the virus particles that are present in the blisters.

If your body has a rash of red blisters, it means you have chickenpox. Symptoms usually appear any time between the first and three weeks after infection sets in. This is the incubation period.

Early symptoms: It’s not unusual for symptoms to start showing up within a day or two, after which the rash becomes visible. These early symptoms are:

These symptoms are not universally experienced, but are common among adults and older children.

Let’s take a look at the symptoms of chickenpox that everyone experiences. They are:

You know that your symptoms are serious if you have these symptoms. In such a case, get in touch with your doctor immediately.

One sure way of preventing contracting this disease is to take the chickenpox vaccine in childhood as this alone protects one against the Varicella Zoster virus. There are two chickenpox vaccines one can take–Varivax and Varilrix.

Who should take the chickenpox vaccine? The chickenpox vaccine should be given to those who are in contact with people with weakened immunity. This helps reduce the chances of infecting others. If one is going to start working in a radiotherapy department and has not had chickenpox before, it would help him to take the vaccine.

Dosage for chicken pox vaccination: Usually, two doses of this vaccine gives 98% effectiveness against the disease.

For infants, children and adults: For children below 13 years old, two doses of the vaccine should be given, one between 12-15 months of age; and second, between the ages of 4 years-6 years.

Children about 13 years of age or older who have never had chickenpox or taken the vaccine, should get take two doses with a gap of 28 days.

Pregnant women should postpone the vaccine until after delivering the baby. Once they take the vaccine, they should not get pregnant for a month.

How the chickenpox vaccine works: This is a live vaccine, which contains a small dose of the weakened virus that causes chickenpox.Once injected, it encourages the immune system to produce the required number of antibodies to protect individuals against chickenpox.

How does a healthcare provider give the chickenpox vaccine? The vaccine is given in two parts in the upper arm with a gap of four to eight weeks.

Is the chickenpox vaccine effective?Nine out of 10 children who are vaccinated once develop enough immunity against chickenpox. However, two doses are recommended for best results.

It’s very rare that anyone taking the chickenpox vaccine has serious side-effects. However, those that have experienced side-effects report having experienced extreme body rash, liver or lung infection, pneumonia, seizures and meningitis.

Chicken pox is treatable, and preventable too. If you do find you have the symptoms, consult your doctor immediately.

12 Things about Indian Flag Every Child Should Know