If you are wondering which book to buy for your kids, Geronimo Stilton books should most certainly be in your bucket list! It is as if your child cannot grow up without reading at least some books from this series and I believe it to be an integral part of his or her childhood. For those of you who don’t know about this series, Geronimo Stilton is an Italian children’s book series written by Elisabetta Dami. It is published by Edizioni Piemme of Milan, Italy, since 2000. Scholastic Corporation has published the English version of the series since February 2004.

Although the series credits its title character as the author, the idea was originally thought of by Elisabetta Dami. In older editions of the previous novels, the copyright was issued to a pseudonym “Geronimo Stilton” but this was changed on newer books. The series of these books are intended for young readers within the age group of six to twelve-year olds approximately. It is surely one of the best-selling book series ever written. Over 130 million copies of this book series have been sold worldwide.

In this series, the title character or the protagonist is a walking talking mouse who lives in New Mouse City on Mouse Island. A best-selling author, Geronimo Stilton works as a journalist and editor for the fictional newspaper The Rodent’s Gazette. Geronimo is a nervous, mild-mannered mouse who would like nothing better than to live a quiet life, almost introvertly. He has a younger sister named Thea Stilton, a cousin named Trap Stilton, and a favorite little nephew, nine-year-old Benjamin Stilton. He, against his wishes, keeps getting involved in far-away adventures with Thea, Trap, and Benjamin, and sometimes even Aunt Sweetfur. The books are written in the form of autobiographical novels, from Geronimo Stilton’s own point of view. The books have been adopted in the form of several other media such as theatres, musical theatres, TV series, video games and comic as well as graphic novels. 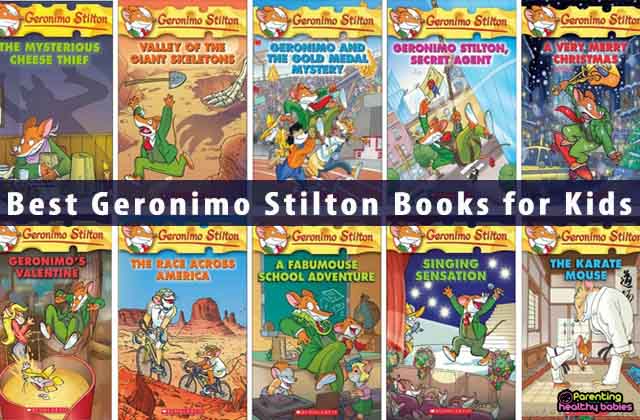 Here is a list of 11 must-read Geronimo Stilton books for your kids:

“Lost treasure of the emerald eye”

You have to read the first book of the series which also serves as the introduction to the entire novel. This is in fact the very book which will arouse the interest of your kid after which he or she would love to read more of these. Introduce your child to geronimo the mouse, his cousins his lifestyle and so on and get them going!

This is the 12th book of the geronimo stilton series and this is filled with fun, frolic and festivity, just as your kid would want it to be. It’s christmas time and geronimo is getting ready for his enormous party, very excited as usual, when one disaster after another happens to the poor mouse. In spite of these, benjamin calls him a hero and things are looking up. Can the christmas be saved? You will have to read the entire book to your kid!

“Red pizzas for a blue count”

The 7th book of the series, “red pizzas for a blue count” will take your kid into an adventure that he or she has always wanted to be a part of. Geronimo, thea and benjamin set out to rescue trap from a problem and your kid will surely be transported with them to his or her dream adventure sequence!

In book 39, geronimo stilton’s song “welcome to new mouse city,”, tops the charts after being enrolled on the song festival. But unfortunately, only a few cds are sold thereafter. Will geronimo be able to unravel the mystery behind this? Your kid will have to read till the last!

“All because of a cup of coffee”

What happens when geronimo falls in love over a cup of coffee? What exactly is your kid’s idea of falling in love? Well, whatever it is, this book, the 10th of the series, is surely one of the most enjoyable books your kids will ever read!

The 23rd book of the series is perfect for your 8 to 10-year-old kids who can quench their excitement about valentine’s day, given this funny yet thought-provoking book. How does geronimo feel when he doesn’t receive any valentine card in spite of sending many to others? Read to find out more!

This is the 11th book of the geronimo stilton series and the spirit of festivity remains alive in this too. As it is halloween must be something your kid wants to know more about and enjoys already! He or she is going to enjoy further on finding poor geronimo afraid of halloween and the funny stories that follow. Most of the things that geronimo finds scary are not really so and your kid will have their time reading this story!

Surprises, adventures and ghosts! Which kid doesn’t love these all? In the 46th book of the series “the haunted castle”, your child will have their own little time getting afraid yet wanting to find out what happens next! This book, with the mystery and curiosity that is contains, is surely unputdownable, even for your 7-year-old.

There is an absolute emergency in book 17! Stilton has to save his newspaper “the rodent’s gazette” and his publishing book company from the hands of the one-eyed rat! Will he be able to do it? It will surely be a nail-biting afternoon for you kid!

“This hotel is haunted!”

The ghost which haunts the hotel wears an armour and carries a ball and chain. This story in book 50 is pretty spooky! Your kid will however make it with stilton and poirat! This is another adventure story in a haunted house that your kid will love like anything!

This is the last book of this series, the 58th one and this surely will be as delicious an adventure for your kid as it is for stilton who as gone as an assistant to trap to this contest! Who will become the best chef on the mouse island? You will have to read till the end to find out!

These books are not just books! They will form an integral part of your kid’s childhood. So, hurry up! Make them a part of your kid before they grow up. Happy parenting!

11 Best Park Games to Play with Your Kids at Park