Buckwheat is a kind of grain that’s extremely healthy for people of all ages, right from babies to adults. It belongs to the the Polygonaceae family of plants. However, buckwheat is not a type of wheat nor is it a grass. It derives its name from regular wheat because it is used in the same way as wheat, and it’s also gluten-free. For this reason, it is consumed by those with Celiac disease and with gluten allergies.

Once a baby is eight months old, he can be given buckwheat cereal. Since it is entirely gluten-free, it is perfect for babies who suffer from gluten-intolerance or Celiac disease. It’s also good for babies with wheat protein allergy. Buckwheat is a powerhouse of nutrients like Vitamin B2, potassium, folate, calcium, magnesium and niacin. They make it perfect for wholesome nourishment for babies and is very good for a baby’s overall healthy development.

Toddlers and older children can also reap the many benefits of buckwheat. These are:

This grain is rich in insoluble fiber that controls asthma in children.

Buckwheat protects children from suffering from asthma. This is due to its abundance of Vitamin E and magnesium. Children who suffer from asthma do so because they have inadequate amounts of anti-inflammatory nutrients like magnesium and Vitamin E.

Buckwheat has an abundance of zinc and selenium, the two trace minerals that are required by the body to grow strong bones and re-grow damaged ones. Selenium is also good for strengthening nails and teeth.

Buckwheat is rich in iron, which is instrumental in forming red blood cells. A deficiency of iron leads to anemia, characterized by headaches, fatigue, mental slowness and other serious side-effects. However, tweaking your child’s diet to include buckwheat can lower his risk for anemia and increase his blood flow.

Buckwheat has high levels of phytonutrients, particularly flavonoids. These important compounds increase the use of Vitamin C and serve as antioxidants that fight and defeat free radicals that cause heart disease and cancer. One of the flavonoids contained in buckwheat is Rutin, which reduces the amount of LDL cholesterol in the blood. It also prevents platelets from clotting, which can lead to heart attack, atherosclerosis and stroke. It also increases the level of HDL, which further lowers the risk of cardiovascular disease. Rutin acts as a vasodilator which increases blood flow and reduces the chances of several types of heart problems and stroke. 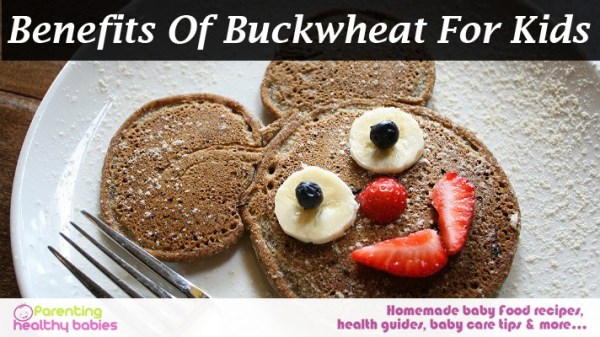 Buckwheat’s abundance of dietary fiber helps lower the amount of blood sugar. In fact, it has a better impact on diabetes than regular wheat flour and therefore manages diabetes better. It also has a glycemic index of 54, which lowers blood sugar slower than rice or wheat.

Buckwheat helps in digesting food better because it is rich in fiber which adds bulk to bowel movements. It also helps bowels to move slowly and steadily through the digestive tract, and stimulate peristaltic motion. Fiber also helps to regulate bowel movements and reduce the occurrence of serious gastrointestinal issues, and colon and gastric cancer. It also helps lower the chances of Irritable Bowel Syndrome and diarrhea. Buckwheat’s neutral thermal properties help cleanse the intestines and strengthen them. This improves one’s appetite, and gets rid of dysentery and chronic diarrhea.

Its rich abundance of antioxidants has a great impact on the immune system, thereby protecting the body from dangerous diseases. Its antioxidant components also eliminate free radicals, like selenium, tocopherols, flavonoids and phenolic acid.

Buckwheat reduces the risk of hypertension and high cholesterol. It also reduces levels of LDL while increasing those of HDL. This has a positive impact on body weight, gallstones and plasma cholesterol.

This grain contains all the ingredients of premium quality proteins, or the eight basic amino acids, lysine included. These amino acids aid in the functioning of the different parts of the body, so foods that give the same benefits would be very beneficial to the body. These proteins easily replace the goodness of red meat and provides all the benefits of those proteins. By eating buckwheat, obese children can lose weight, while also providing extra boost of energy and increasing mental ability. They also retard the pace of muscle strength and mass, or sarcopenia, and replacing it with endurance, strength and durability.

Buckwheat can confidently be given to children as part of their daily diet for all its wonderful benefits, which they can reap in the long-term. 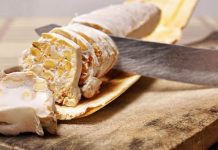 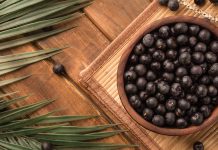