Fifth disease, often called as “slapped cheek disease is caused by a virus named Pavovirus B19. It often results in red rash on legs, arms and cheeks. It is common and mild in most children but is severe for pregnant women. This disease mainly targets people with weakened immune system. It is common for the kids in the age between 5 to 15 years.

At first this disease is caused on the cheek of the kid and spread to trunk, arms and legs.  This infection is caused in spring and winter and lasts for 1 to 3 weeks. The virus is spread through air or from blood of infected people. If a pregnant women is infected the virus will even cross the placenta and affects the fetus.

This disease got the name of fifth disease in 1890s. In those days this disease was in the fifth place in the list of rashes that are occurred in children. The cases of this disease are mainly found in school community outbreaks. At least half of the North Americans are affected because of this disease.

People affected with this disease are contagious in early stages and once the rash is developed they won’t spread the disease. In early stages the affected people must be careful. If a person once got affected from this disease in a life time, it is guaranteed that he won’t get affected by it again in his whole life. Lifelong immunity is for sure. 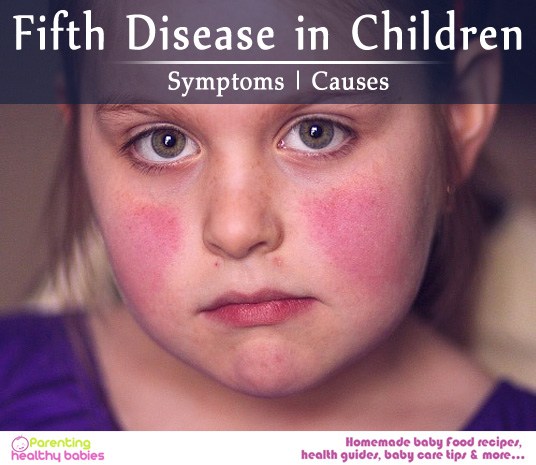 The Fifth disease can be diagnosed by just looking at it but the doctors run a few tests to be sure and to give suitable anti bodies.

As fifth disease spreads from one child to another it is better to avoid contact from people who are coughing, sneezing and suffering from cold. Washing hand frequently and using sanitizers regularly help in preventing Fifth disease.

Fifth disease isn’t so dangerous but in some cases it may become serious too. So parents must be careful and prevent the disease to maximum extent. Kids won’t face many problems with this disease but suffering from fever or nausea is also need to be prevented.

Taking rest is enough for Fifth disease occurring in healthy children. But children with weak immune system may face many problems and fall severely sick. Parvovirus B19 can slow down or stop the production of red blood cells and may lead to Anemia. So taking the immune system of the kids into consideration it can be decided on the type of treatment given to them.

Call your doctor immediately if any severe situations arise and don’t take any decision for yourselves.

Why Does My Infant Keep Rubbing Her Ears: 7 Reasons Every...