A mother needs to eat as well as drink healthy and fresh during pregnancy and after delivery. After delivery, it is essential as during breastfeeding most of the nutrients are transferred from the mother to the baby by breast milk. These days in the modern world, smoking and drinking alcohol is common for both man and woman. During pregnancy, it is better to restrict the mother from the consumption of alcohol and smoking like tobacco or weed.

Weed, specifically Marijuana is being smoked these days a lot. Whether it be a teenager or a young adult, it harms the body. Smoking during pregnancy is harmful to the fetus while during breastfeeding it leads to the transfer of harmful substances to the baby through a process called nursing.

Risks of Smoking Weed While Breastfeeding

Is Marijuana Safe while Breastfeeding?

No, smoking Marijuana while breastfeeding is not as safe as the main content of Marijuana, is tetrahydrocannabinol (THC) which is found in the blood circulation and can easily get into breast milk. Since the breast is basically made up of fat cells, it is found that THC easily gets dissolved and stick to the fat cells of the breast. From there, THC gets into the baby through the breast milk in the concentrated form within 6 days of smoking Marijuana. 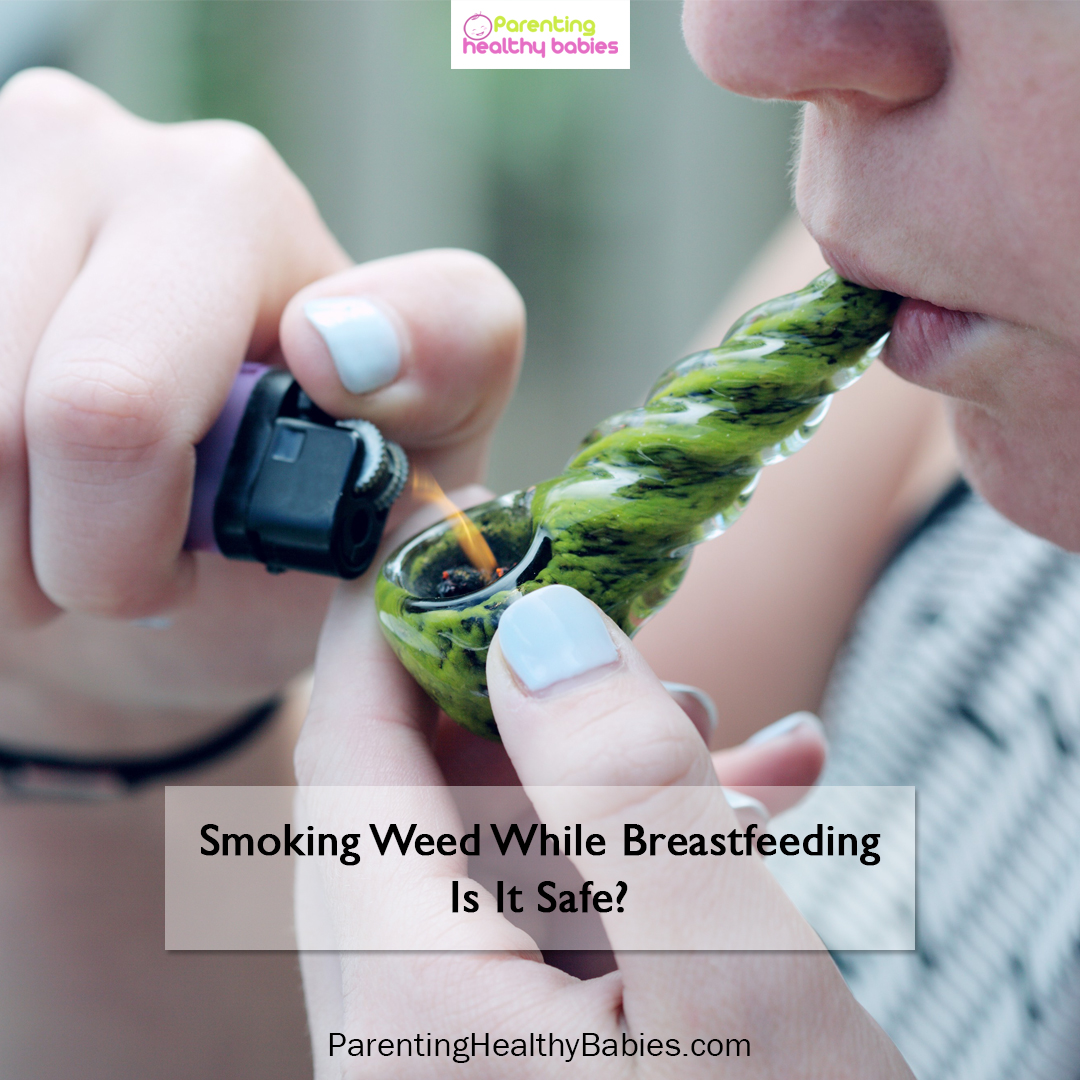 As such, there is no standardized dose of Marijuana which considered to be harmful and it has a different effect on different people. But researches prove that a single joint contains at least 1 percent of THC which is harmful enough to be secreted in the breast milk and later can be excreted in the baby’s urine. It has been also observed that Marijuana slows down milk production. Therefore, it is better to avoid it during breastfeeding.

If a mother smokes Marijuana, around 400 chemicals get into the bloodstream of the mother and then transmit to the baby through the breast milk. Along with THC, cannabidiol (CBD), the primary nonpsychoactive component is also seen in breast milk. This CBD accounts for medicinal benefits such as analgesic, anti-emetic, and anti-anxiety in nature. The THC is known to attach to the protein receptors present in large numbers inside the brain and make the person high. Out of these protein receptors many are involved in brain development. Thus, THC can alter the normal brain development of the baby.

Pumping and dumping for a few hours or a few days cannot prevent the transfer of these harmful chemicals to the baby. Therefore, there is no safety rather it just creates a false sense of safety in the mother.

Marijuana Effects on Baby During Breastfeeding

Babies who are exposed to Marijuana are more likely to be fatigue easily and have poor suckling habits. In the case of long term use of Marijuana, babies exposed to THC in breast milk had poor scores in motor skill development tests. Many women not only expose bay to Marijuana through THC but also through secondhand smoke.

Can You Smoke Pot Around the Baby if not Breastfeeding?

Through researches, it has been found that it is better to avoid Marijuana for the mother as well as her husband because not only THC ingest through breast milk affect the baby but smoke pots are also responsible for the development of asthma and other respiratory disorders in babies. This is considered to be caused by breathing in secondhand smoke. Therefore, it is better to avoid smoking weed even if not breastfeeding the baby.

Chances of asthma or other respiratory infections along with ear infections increase with secondhand Marijuana smoke. Smoking around them also leads the smoke to get in their system and harm them and get them high. We never wish for children to get high or expose to the dangers of inhaled secondhand Marijuana. Long term effects on the brain are also seen in for of delayed development or abnormal development of the brain.

Risks of Smoking Weed During Breastfeeding

It is better to avoid smoking weed during breastfeeding. Following risk should be considered

Effect on the Central Nervous System and Brain: Marijuana is a psychoactive drug that has a direct effect on the brain. Therefore, babies fed on Marijuana containing milk have a risk of impaired brain.

Regulation of Emotions: Early exposure to THC, is responsible to cause long term changes in emotional regulation in children.

Drug Abuse in Later Life: Children who are exposed to THC have a higher tendency to develop drug abuse.

11 Essential Oils to Avoid during Pregnancy