When it comes to screen time for kids, one question that is often raised is – how much is too much? Parents often wonder how to restrict the screen time of their kids. Especially now when the Covid-19 pandemic has led everyone indoor with nothing to do except get glued to TV screens and mobile phones. 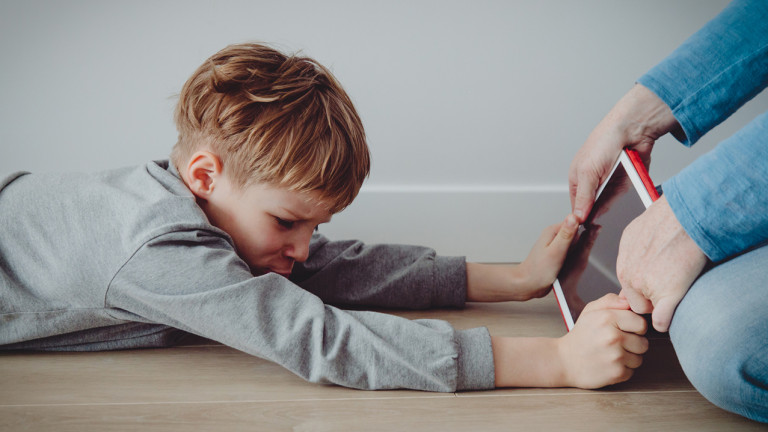 For kids it is easier to get addicted to hours of watching their favourite cartoon or play their favourite mobile games for hours at an end. Although, mobile phones are used for educational purposes as well, but an extended period of screen time for kids is bound to cause harm.

In What Ways Does Too Much Screen Time Affect Children?

Increased screen time leads to decreased sleep. Irregular sleeping patters are often a result of watching excessive TV or playing games on mobile till late at night. Due to this, children face problems in sleeping early and get fatigued easily. This impacts their health as they trouble falling asleep. Due to incomplete sleep, kids may also fall asleep during class or they might also not be able to concentrate in class as well.

Children who spend hours in front of a TV are more prone to getting overweight, as they hardly move and get outside. It gets a habit for them to lay in their comfortable spot and watch TV for hours and this leads to their craving of junk food. All of these factors lead them into being overweight and unhealthy at a young age.

When kids are exposed to screen for more than 2 hours a day, they are most likely to display emotional, social and behavioural problems which comes with attention issues. Children who spend more time playing video games have increased possiblity of developing attention problems than others. Some violent video games may also lead children in believing and showcasing violent behavior.

If a child spends huge amount of time in front of a screen, he is bound to perform poorly in his academics. Watching screen for hours at end disturbs the concentration power of children and they tend to neglect their studies. If they continue to spend hours in front of TV or mobile then they tend to get poor marks as compared to their peers who study well and do not get engaged with screen for long time.

Turn off the TV in Background

If you’re among those parents who keep their TV running in the background even when they’re not actively watching any thing, then this habit of yours may be causing harm to your child. As a child’s attention will linger towards the TV and they will not be able to concentrate on studies. So if you have the habit of keeping the TV running in the background while during chores, it’s time you stop doing so.

Avoid Eating In Front of Screen

When you allow your kids to eat in front of TV or while watching movies on the mobile phone, you’re increasing their screen time unknowingly. This habit can quickly develop into an addiction where your child refuses to eat without watching anything first. This is also harmful as children who eat snacks or food in front of TV do mindless munching, which results in weight gain.

Keep Computers and Smartphones Out of Bedroom

When computers are kept in the bedroom, children tend to spend more time playing in them. As they feel comfortable in their bedroom, they can watch anything available on the internet without supervision. It is important to keep an eye on what you’re child’s viewing and what sites he or she is visiting. So it is best to keep computer and smarphones in a common room where you can look at it, rather than keeping them in the bedroom. In this way you can keep control over their watching time as well.

When your kids come home from school, be sure to talk to them and ask them about their day rather than just asking them to go watch TV while you’re busy doing your work. Spend time with them everyday and let them know they have your attention. Be supportive of their achievements and right them of their wrongs. Getting more engaged with your kids will also keep your bond with them stronger.

Kids love to play outdoors and a walk outside away from your phone, is something that can benefit you as well. It could be a simple hide and seek or a badminton game you can play with your kids or they can play with their friends. When kids play outside, it not only keeps them away from screen but also makes them healthy and strong. Make it a family routine to play outdoors every weekend. Encourage kids to get out in the sun.

Set Realistic Goals and Be Accountable

When your children are spending more than the allowed screen time, ask them to stop doing so. If they’re already spending way too much time in front of the screen, start by reducing it to half. This realistic approach will help in attaining your goals in appropriate time. Introduce your children to fun activities like drawing, painting or baking. Encourage their art and participate as much as you can.

In a study conducted by the National Institute of Health in 2018, it was found that children who spent more than 7 hours a day in front of a screen, experienced thinning of the brain’s cortex which is responsible for reasoning and critical thinking. So it is better to take hold of the screen time of your child and reduce it for their benefit and well being.

Cause and Treatment of Canker Sores in Children

5 Serious Causes of Lethargy in Toddlers