What is an ovarian cyst?

Ovarian cysts are a very common female condition. As ovarian cyst is a fluid-filled sac on an ovary in the female reproductive system. Most women have this sometime during their lives and fortunately, most of these cases are benign and do not require any special treatment.

The female reproductive organs are located in the pelvis, between the urinary bladder and the rectum. The ovaries have two main functions, one, the production of specialized hormones, such as estrogen and progesterone, and second, ovulation, which is the release of eggs that are needed for reproduction. The hormones produced by the ovaries are very important in keeping ovulation regular. These hormones also prepare the inner lining of the uterus to proceed with a pregnancy. Before the egg is released small cyst forms on the ovary. A cyst is a fluid-filled area. When the egg is released, it goes down to the uterus through the fallopian tube, where it may be fertilized. The cyst on the ovary usually disappears at that time. If the egg is not fertilized, the egg and the inner lining of the uterus are discharged to the outside of the body during the menstrual period. This cycle repeats itself every 28 days, while the ovaries are still active.

Ovarian Cysts: Facts You Should Know 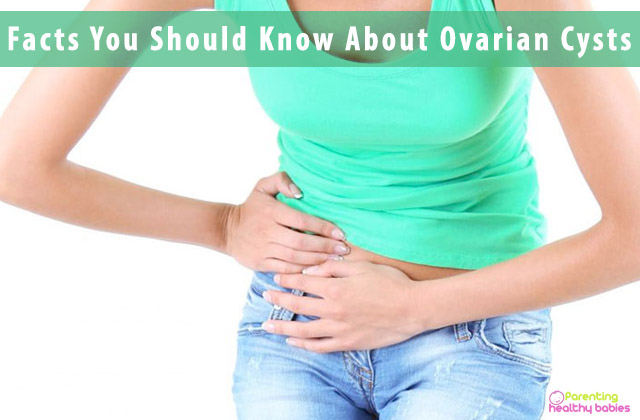 The uterus is pear-shaped and is about 3 inches long and has 3 layers. The inner layer of the uterus is called endometrium.

Most ovarian cysts are harmless and may never even trigger any symptoms at all. These typically need no treatment and disappear in a few months. If symptoms do appear, it’s probably because the cyst has grown to a significant size. A large ovarian cyst can cause the following:

However, in rare instances, an ovarian cyst may rupture, causing serious symptoms and an imminent danger to your health. Seek immediate medical attention if you have sudden, severe abdominal or pelvic pain, pain with fever or vomiting, shock, cold and clammy skin, rapid breathing, lightheadedness or weakness.

Follicle cyst: this happens when the follicle fails to rupture and release the egg at ovulation, instead it continues to grow, forming a cyst.

Other ovarian cysts are due to benign tumors. A benign tumor is a tumor that does not invade other tissues and is not cancerous. These include:

Dermoid cysts: the cells in the ovary are able to make hair, teeth, and other growing tissues that become part of a forming ovarian cyst. These cysts can become large and cause pain.

Endometriomas: these cysts develop in women who have endometriosis, when tissue from the lining of the uterus grows outside of the uterus. The tissue may attach to the ovary and form a growth. These cysts can be painful during sexual intercourse and during menstruation.

Cystadenomas: These cysts develop from cells on the outer surface of the ovary. They are often filled with watery fluid or thick, sticky gel. They can become large and cause pain.

Polycystic ovaries: the eggs mature within the follicles or sacs, but the sac doesn’t break open to release the egg. The cycle repeats, follicles continue to grow inside the ovary, and the cyst is formed.

In this case, increased body hair may be noticed by the patient.

Pain and discomfort: ovarian cysts may rupture, bleed or twist the ovary. They can cause pelvic pain and discomfort during intercourse. If you experience severe sudden pelvic pain, especially if it is accompanied by vomiting or a fever, you should visit your doctor.

Ruptured ovarian cysts: this can potentially cause serious complications which must be considered. The twisting of the ovary is one of those complications, which may lead to infertility. Leakage of cystic fluid into the abdominal cavity may also result in a condition called Sepsis. Ruptured cysts can also lead to dangerous hemorrhagic complications.

Peritonitis: it is another complication caused by a ruptured ovarian cyst. It is an inflammation of the mucous membrane, which lines the abdominal cavity. Peritonitis is a serious condition that can endanger your health.

Cancerous growths: Some benign ovarian cysts may increase the risk of ovarian cancer. Malignant tumors, or cancer of the ovaries, can start as a cyst on the ovaries.

Surgery: if an ovarian cyst, becomes too large, is considered to be a higher risk for rupture, is a complex cyst, has twisted or has become attached to other parts of the internal body, then a doctor may choose to remove it surgically.

Supplement with DIM: DIM helps to clear the body of excess estrogens, aiding in hormonal balances and reducing the promotion of ovarian cyst growth. DIM should be taken daily for at least three months along with lifestyle changes which include avoiding xenoestrogens found in products, foods and the environment.

Ovarian cysts can’t be prevented but can be detected early. If any symptoms of ovarian cysts are observed, it is good to see the doctor to receive a diagnosis. The symptoms that must be reported to the doctor immediately are pelvic pain, loss of appetite, abdominal fullness, unexplained weight loss, and changes in menstrual cycle.

How Much Sugar is Good for Your Kids?