Causes of Nose bleeding in Children:

There are several factors which cause nose bleeding in children. Before learning about the home remedies, these factors need to be understood. Nosebleeds in children happen when the tiny blood vessels lining inside the nose breaks. These tiny vessels get ruptured for various reasons. The ruptured vessels start to bleed. The following are the different reasons which makes your child’s nose bleed. 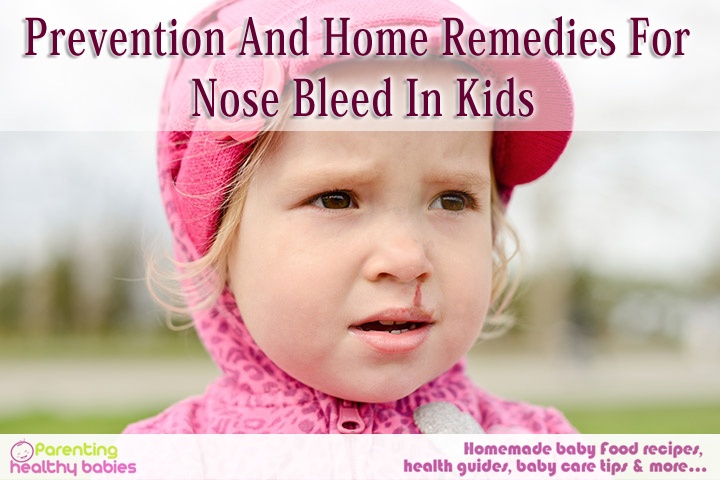 There are also possibilities that your child has suffered a serious blow on the head or the back. This also makes his/her nose to bleed. However, this kind of bleeding is pretty serious. You should immediately take your child to the doctor’s if he/she starts bleeding after a head injury. Sometimes nose bleeding in children can also occur due to some problem in the blood clotting system. But that is very rare.

In most of the situations the nose bleedings are curable through prevention and home remedies.

There are several home remedies and prevention steps you can take to stop nose bleeding in your child.

Whenever, your child is experiencing nose bleeding, he/she might get scared. A scared child might cause more harm to him/her. As a parent you should first comfort and reassure your child. Try to stay calm and composed. Make sure that your does not cry too much. The pressure of crying increases the blood flow or makes it worse. Let your child know that it is just a minor thing and check for any kind of foreign objects in your child’s nostril.

The first thing to do is make the bleeding stop. Make the child sit upright straight on a chair or a sofa. Tilt his/her head forward and pinch the nose at the body ridge. Hold and keep the pressure for at least 5 minutes. Ideally the bleeding should stop by then. If the bleeding does not stop, apply pressure somewhere else to make it stop.

Ice often does the trick. Ice helps in cooling the nasal membranes. It helps in coagulating the blood. Wrap some ice in a piece of cloth and apply it directly to your child’s bleeding nose. However, make sure that your child’s head is not tilted backwards. Otherwise, he/she might swallow the blood.

Lemon juice has good antiseptic properties. It helps in the process of blood coagulation. If your child is having a bloody nose, then you can add few drops in it. This will help in the clotting of the blood at a faster rate. It is known to stop nose bleeding in a jiffy.

Ask your child to breathe from mouth. This helps in preventing the further damage of the tender nerves. Once the bleeding has stopped, then again he/she can start breathing from nose. Breathing from mouth is a good alternative while the treatment is going on.

Dry weather often causes a child’s nose to bleed. So, if the air humidity, at your area is low, you can use a humidifier. Use a humidifier in your child’s room so keep the air moisturized. Wet and heavy air tends to prevent nose bleeding in children.

In order to avoid constant bleeding, use a saline nasal rinse. This will help in keeping the nose wet. When the humidity level of the atmosphere is low, children can undergo nose bleeding. Saline water helps your child’s nose to stay wet all the time. This prevents the chances of rupture and breakage of the tender tissues of the nostril.

A simple and yet effective home remedy. Apply a wet towel on your child’s head. Make sure that the water is cold but not ice cold. This will help the body heat to get reduced. The clotting process also starts upon cooling.

If your child regularly experiences nose bleeding then feed him/her with vitamin K rich foods. Barley, oats along with dark leafy vegetables are rich in vitamin K. Vitamin K helps in the process of clotting of blood.

First of all, under any condition do not allow your child to tilt his/her head backwards while bleeding. This will make the blood run down the throat. This might choke him/her. Also if the bleeding is being triggered due to some accident or head injury, then do take him/her to the doctors, on an immediate basis.