You’ve probably seen some skin growths on either your body or a friend’s. These are warts, benign growths caused by a virus called the Human Papillomavirus (HPV). They are ugly but painless and harmless, though they may itch sometimes. Usually, warts are seen on the complexions of kids rather than adults as they are more liable to catch bacterial infection.

Read More: 11 Tips For Taking Care Of Your Kids Skin

Natural remedies for warts in kids

Medication often cures warts in kids, but there are also several natural remedies that are equally effective.

This oil contains antiseptic and antiviral properties, making it effective in fighting the HPV virus. The oil prevents the infection from spreading and fungi and bacteria from developing. This reduces the irritation, inflammation and redness associated with warts. Tea tree oil also contains an antimicrobial compound known as Terpinen-4, which attacks the arts-causing virus and prevents them from developing further. Plus, they dry out faster now and fall off.

To use tea tree oil, wash the area surrounding the wart and dab it with the oil. Cover it with bandage and let it remain for about eight hours or overnight. In the morning, remove the bandage and clean the area. Change the bandage every night and repeat the process until the wart disappears or falls off.

Apple cider vinegar is basically acidic and is very effective in getting rid of warts. Soak a cotton ball in the vinegar and dab it on the affected area. It also helps to stick the cotton ball to the wart with plaster and keep it on for three hours.

Like apple cider vinegar, Vitamin C too is acidic and is capable of fighting the HPV virus that causes the wart. To use this on a wart, powder a few Vitamin C tablets. Make a paste of it with water and apply it on the wart. Keep the paste on for some time by covering it in bandage. You may initially feel a burning sensation, but it will soon subside. Vitamin C tablets work because they contain high acidity levels that destroy the HPV virus.

Banana peel contains antioxidants and strong chemicals that help dissolve warts. Bananas also contain a proteolytic enzyme that erodes the wart until it disappears. Put a banana peel face down on the wart and hold it in place with tape. Keep it on overnight and take it off next morning. Continue this for a few weeks until you see results.

Yet another highly acidic substance, baking soda helps fight the HPV virus and get rid of it entirely. To use it on a wart, mix a spoon of baking soda with an equal quantity of white vinegar to make a thick paste. Cover the wart with this paste twice a day. You can also add some castor oil to baking soda and make a small ball of it and press it down on the wart. Close it with a bandage and keep it on overnight. Next morning, remove it and continue these steps for a week or till you see results. 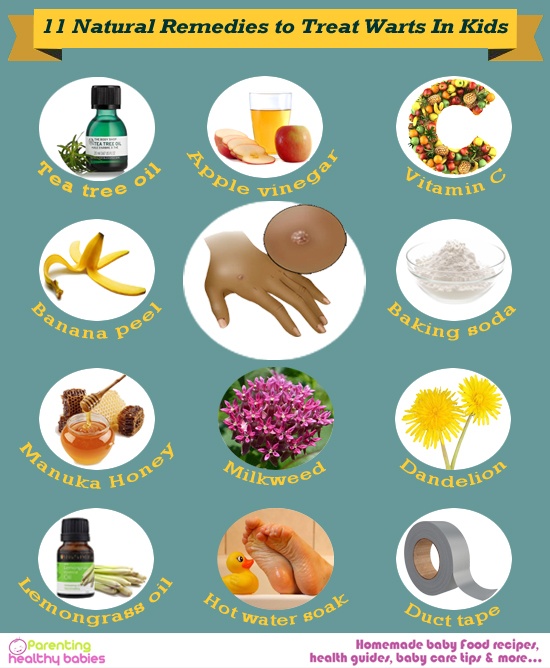 Manuka honey is rich in antiviral and antibacterial properties. It creates a kind of “occlusion therapy”, a technique by which the wart is oxygen-deprived. This makes it easy to remove. To use manuka honey for wart removal, expose the wart with a pumice stone and then lace it with a generous helping of honey. Bandage the wart and let it remain for the next 24 hours. Change the bandage and reapply the honey every day till the wart goes away completely.

Read More: Health Benefits of Honey for Toddlers and Children

Milkweed is known to be toxic, since it contains a poison called cardiac glycoside. Despite this, it can be used topically to get rid of warts. It also contains a proteolytic enzyme that helps digest and dissolve the wart.

To use it for wart removal, slough off the top of the wart with a pumice stone so that you expose it a little. Now, extract some milkweed sap from its leaves and apply it to the wart. Let the sap remain on the wart and cover it with a bandage. Repeat this once a day till the wart falls off.

Dandelion stem extract has properties that can boost your immune system. Pick a dandelion and break its stem to pour the juice on the wart. This may irritate the wart a little. Try this method only if you have access to organic dandelions and not the ones treated with herbicides or pesticides.

As you can see, there are a number of essential oils that are great for eliminating warts, and lemongrass essential oil is another one of them. Studies have shown that it can effectively eliminate the herpes simplex type 1 virus, which is the one that causes cold sores, so it’s not all that surprising that it makes an excellent wart treatment as well. While it hasn’t been tested specifically for warts, many find that it is very effective, and it makes a good alternative if you don’t want to experience the burning sensation of oregano essential oil.

Read More: Health Benefits of Lemongrass for Kids and Toddlers

If you have warts on your feet, soak them in warm water for about 15 minutes each day. For better results, add some vinegar or Epsom salt. Use an emery board to clean your feet before you soak them in water.

Also called tape occlusion, it actually works to get rid of ugly warts. It’s actually effective because it prevents oxygen from reaching the wart, thereby reducing its growth. You can use this technique to remove a wart by following these steps: Take a piece of duct tape that’s the size of a wart. Leave it on for about six days. During this period, if it falls off, start again with another duct tape piece.

After six days, take off the tape and soak the wart in water. Rub the wart’s surface with a pumice stone. Don’t cover the wart with the tape but keep it bare for one day. Next day, repeat the process and continue in this manner till the wart goes away entirely.

Warts may look ugly but there are several home remedies that can get rid of them. Choose from any of these options outlined here and give yourself a smooth complexion.

11 Dinosaur Movies Your Kids Would Love