The food industry is one that is constantly evolving. With due attention to the presentation of a good item and ever-changing trends, fusion food has added a note of experimentation to the experience of food. Science has also been incorporated in gastronomy with substances like liquid nitrogen being widely used by top chefs all over the world to cook a variety of dishes for the patrons in their restaurants. Be it a gourmet dessert at a top-notch restaurant or a popular mall treat like Dragon Breath, the liquid nitrogen ice cream is the new trend that has been embraced and celebrated by the world.

But are there no consequences to using such a potent chemical substance in an industry as vital as the food industry? Children may be obsessed with the idea of ice cream emerging out of a cloud of vapour, but the question of whether that threatens the safety of your child is something that must be taken seriously. While there are definite uses of liquid nitrogen in the domain of food, the jury is still out on whether the risk is something that we should embrace. 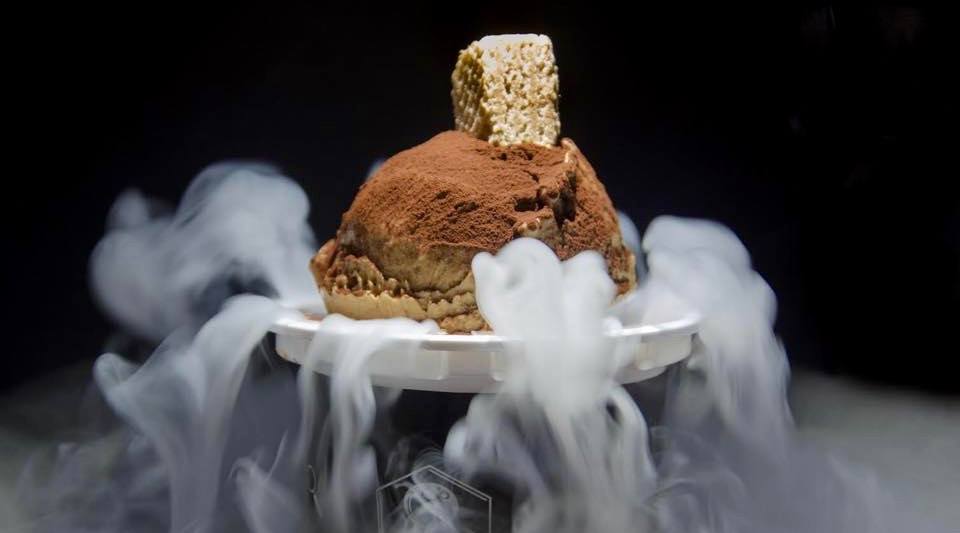 What is liquid nitrogen?

Nitrogen is a gas present in the atmosphere of the earth in the highest percentage. It is a harmless gas and according to physicists, liquid nitrogen is nothing but this same gas, harmless, cooled to such a temperature that it becomes liquid in consistency. In its gaseous state nitrogen is invisible and undetectable. So when liquid nitrogen is exposed to air, the liquid state attains it’s gaseous form and seemingly disappears in a cloud of vapour. It is only in the cold, liquid state that liquid nitrogen is dangerous.

The boiling point of liquid nitrogen is -196°C, making the liquid gas perfect for research in cryogenics, where scientists study the effect of extreme cold temperatures on the human body. Additionally, liquid nitrogen may also be used in medicine to get rid of pre-cancerous cells, warts or unwanted skin. All this provides ample reason to question the use of liquid nitrogen in the domain of food, and whether it is a safe route for gastronomy to take.

Read More: Can I Give Ice Cream to My Baby?

How is it used in the food industry?

The use of liquid nitrogen in cooking is not for theatricality alone. The substance may be used in the kitchen in variety of ways, some of which are discussed below:

Liquid nitrogen can be used in freezing food and drinks instantly, which can be really handy to anyone running a busy restaurant.

The cloud of vapour when liquid nitrogen is exposed to air adds a definitely remarkable edge to the presentation of a dish. In gourmet restaurants, presentation is an important marker of a quality experience.

If you have a sweet tooth and like your ice cream to be perfect, liquid nitrogen can help do that for you. Liquid nitrogen ice cream is generally known to have a smoother texture which is more pleasing to the eye and to the tongue.

How can it be toxic for my child?

Compelling cases of internal injury and death from liquid nitrogen has been brought under the notice of the Food and Drugs Association in the USA. The internals injuries are of massive proportions, often affecting internal organs in a way that causes perforation on the walls, often resulting in the removal of the organ altogether.

Some of the reasons why liquid nitrogen ice cream may be toxic for your child are given below:

Read More: 11 Ways to Control Junk in your Kid’s Life

It cannot be denied that using liquid nitrogen adds a novelty to the experience. The quality of liquid nitrogen to evaporate immediately when exposed to air creates an air of theatricality when brought out along with the food. Top restaurants strive for the added edge that liquid nitrogen provides to their already impressive dishes.

If the gas evaporates instantly you might wonder wherein lies the actual danger. It is the accidental consumption of liquid nitrogen that creates issues that are potentially life-threatening. Here are few precautionary measures to keep in mind if your child is around liquid nitrogen:

My Babies Snore in Sleep: Is that Normal?

How Many Days to Wait Before Starting Antibiotic for Fever in...