Although the FDA approves certain natural food coloring in children­’s foods there are some other scientific bodies which claim otherwise. Studies have shown that artificial coloring (often mixed with the natural ones) have some adverse side-effects on the kids’ behavior.

Your child might become hyperactive. He/she might remain very irritable. They will be unable to focus or concentrate on anything for a long time. They will suffer from serious attention deficit. These are the basic few dangers that food coloring possess. (Kanarek, 2011)

However, there are other fields of study which claims that most of the colorings are safe to be consumed by kids. Now before we evaluate the benefits and the risks of food coloring in kids’ food let us first educate ourselves about the type of food coloring which are present in the foods. 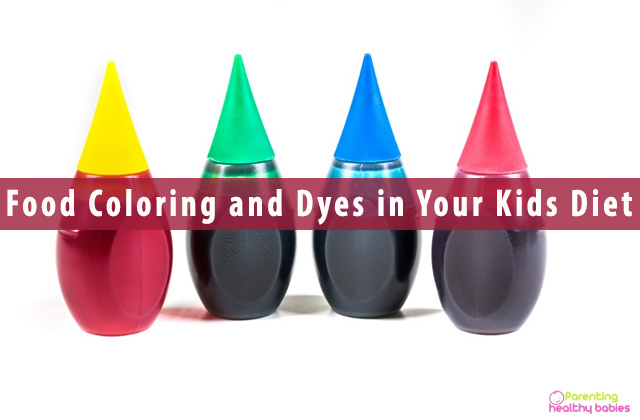 It is misconception amongst many parents that food coloring is only present in the sugary cereals and candies. Whilst it is true that the food products like Trix and Lucky Charm contain heavy coloring, there are other food products also which are artificially colored.

The reasons behind using food coloring are more commercial than it is concerned with health and safety of the consumer. Food coloring is used for bringing uniformity in color. This is done in order to make the food item appear more attractive. It adds to the appeal of the particular food item. (Arnold, 2012)

It is a common consumer psychology not to purchase any food which does not appear brightly colored. That is the reason why food producers and marketers deliberately use some food coloring in order to lure the consumers.

However, in order to gain that uniformity of colors the companies can easily use natural food coloring sources which are obtained organically. But according to the report published by CSPI the food coloring used in most food items of the United States is from artificial sources. This triggers a great deal of risk to the health of your child.

Heavy food coloring is used in substances like M&M, Skittles, the strawberry syrup used in McDonald’s and many other food products all across the United States. So, you must make wise choices before you allow your child to consume such things.

Although according to the FDA the addition of food coloring in children’s food is safe but studies have found out that there serious health impact of these items on children’s mental health.

Children below the age of 3 years suffer from hyperactivity and lack of concentration when they consume foods containing artificial colors. They tend to be more restless when compared to children having foods which contain fewer amounts of artificial colors. (Kanarek, 2011)

Also at the same time children between 8 and 9 years of age suffer from the lack of concentration and focus when they consume foods containing artificial colors. They suffer from hyper-activity and serious attention deficit. This harms their academics. It also affects their other activities as well. In some cases children consuming more artificially colored foods are prone to show addictive behavior in the future. (Arnold, 2012)

So, it can be safely concluded that artificial coloring in food items for children do not offer any kind of health benefits. Rather they impact negatively to their behavioral development of your child.

Tips for the Parents

Food coloring has the tendency of impacting your children’s behavior. It also impacts the overall attention level of your children. The following are some of the tips by which you can prevent your child from consuming food coloring:

Recently many artificially colored food items are being replaced by natural colors. Read the labels of the food items you buy for your child. Seek for any information regarding the artificial coloring.

Avoid buying stuffs which are artificially colored. Try and change your child’s food habit so that he/she is not in any sort of danger.

Kombucha For Kids: Is It Safe?

11 Ways to Prevent Spitting Up in Babies