Herpes is a dreadful condition that can leave you writhing in pain. But, is it okay for you to have herpes during pregnancy? And, is herpes risky for your baby? Read on for more information.

Is Herpes During Pregnancy Dangerous for Baby? 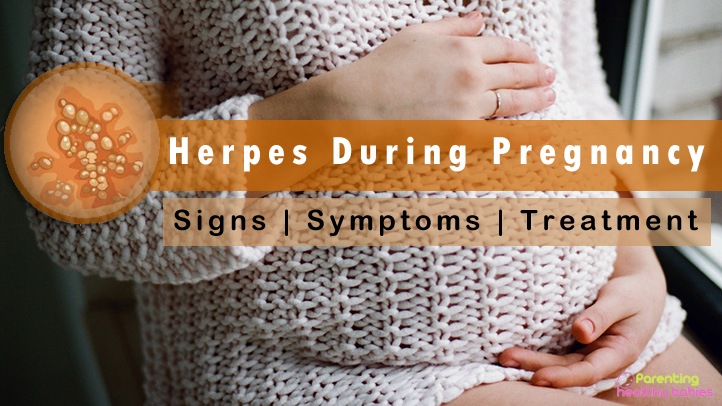 There are lots of questions which arise in the mind of the would-be-mother when she comes to know that she has genital herpes, even if there are no clear signs and symptoms of the same. She has obvious fears if this sexually transmitted disease will have negative and adverse effects on the child or not. Usually women with genital herpes have normal deliveries and healthy babies. However, there are minor risks of complications while being infected with herpes when pregnant. The stage of the pregnancy and the history of attacks of genital herpes are taken into consideration when it comes to understanding the risks and complications of genital herpes in pregnant women.

Signs and symptoms of genital herpes in pregnant woman

As it has been mentioned previously that genital herpes is a sexually transmitted disease. This means that the virus is transmitted from one person to another. Contact with the infected person is the only way of transmitting the disease. Some of the common contact ways are as follows:

Is having genital herpes during pregnancy dangerous?

Generally it has been seen that women who are infected with genital herpes during their pregnancy period deliver healthy babies. However, in some women, the virus might cause some kinds of problems while one is pregnant. There is also a small risk factor involved with this disease. There are chances that the virus could be transmitted to the baby during the process of giving birth.

Women who have genital herpes for the first time and are up to 24-26 weeks pregnant (including the first and second trimester of pregnancy) are usually at higher risks of miscarriage. Not only this, there are higher chances of the virus being transmitted to the unborn baby. When the baby is born, he/she might be carrying the virus within.

When the herpes attack takes place for the first time after the 27th week of pregnancy, the risks and chances of passing the infection to the unborn baby is quite high. This is in the third trimester of pregnancy. In order to prevent the transmission of the virus to the baby, it is recommended to have a caesarean section. This minimizes the risk of transmitting the virus to the baby, chances of which are high during vaginal birth. If there are active sores and blisters of genital herpes and you have vaginal birth, there are high chances of the baby acquiring the infection.

Are there treatments for genital herpes which are safe during pregnancy?

When it is the first attack of genital herpes during pregnancy, acyclovir – an antiviral medicine can be used for treating the herpes virus, before the birth of the baby. The medicine is safe and has no harmful side effects on the unborn baby.

If you feel that there are other kinds of problems happening, contact your healthcare professionals right away.

Do Babies Poop in The Womb? – Is It Dangerous?

Chanting Mantra During Pregnancy: Does it Impact the Unborn Baby?