Giving birth to a child is a different and unusual experience nothing less than a miracle. This miracle turns downright awe-inspiring in rare cases, known as en caul birth.

What is an En Caul Birth?

‘En caul birth’, this term means a baby is born with an intact amniotic sac. This makes it seem like the newborn is gift-wrapped in a soft, jello-like bubble. Another name for en caul birth is veiled birth. It is a rare phenomenon to happen, 1 in 80,000 births. It appears as if the birth of a child occurred in a science – fiction film. Small tony hands press against the membrane of the sac and the baby is inside a translucent egg. There are 2 types of cauls, the most common caul is adherent to the baby’s head and face and encircling around the ears. While the other caul covers the head and partly moves down the torso of the child. 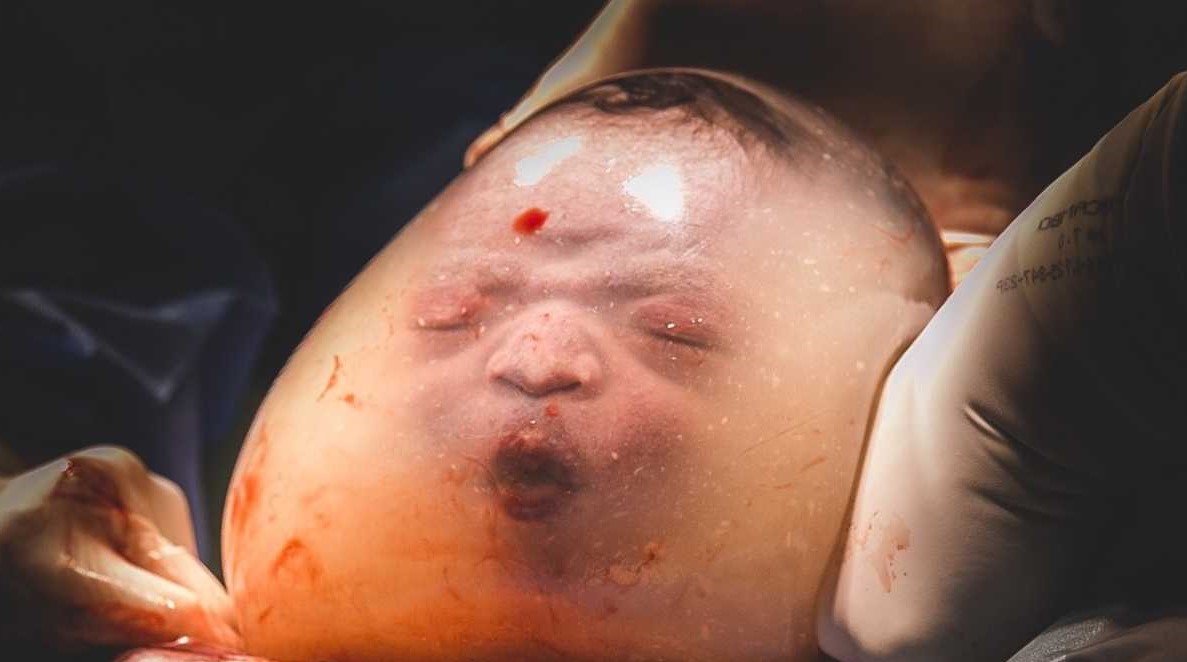 Caul is harmless and can be removed by doctors or midwives easily. All it requires is a small cut over the membrane across the nostrils to enable proper breathing in the child. Loops are then later un-looped from the back of the ears. The remaining caul is carefully peeled off from the skin or rubbed with the help of a sheet of paper which is then peeled back from the baby’s skin. Removing the caul quickly can lead to wounds on the infant’s flesh, which produce permanent scars.

In most of the cases the caul is preserved and handed to the mother irrespective of either being informed or not, the baby had an en caul birth.

Where is the placenta in an en caul birth?

Here the baby is born with a small piece of membrane or sac covering the head or face. This covering appears as a thin, translucent, organic hat which can be taken off easily by the doctor or midwife. Sometimes a caul can happen when a little piece of the lining of the sac tears away and adheres around the head of the baby. Sometimes it may cover the shoulders or chest of the baby, resembling as a cape of a superhero.

The body of the baby is completely encased inside the sac.

Moreover, caul birth is more common than en caul birth. In caul births, caul is referred with different names in different languages such as “helmet” or “fillet” or “shirt” or “bonnet”.

An amniotic sac is a bag full of water in the uterus. It may be known as membranes as it comprises of two layers. Amniotic fluid starts to fill soon after the conception. The baby floats inside the sac while developing and growing rapidly. Amniotic fluid protects the baby by acting as a cushion and keeps the baby warm. Drinking this ‘magic potion’ can result in the good development of lungs, stomach, intestines, muscles, and bones. En caul birth is less likely to result from vaginal delivery when compared to cesarean section delivery. This is due to the reason that the amniotic sac usually ruptures when the mother goes into the labor, but in rare cases, the mother may go in labor without rupture of the sac, and thus the baby is born as en caul birth baby. Also in such birth, the baby is more likely to be a preterm or premature baby rather than a full-term baby.

Is there any significance for en caul birth?

As it is a rare thing to happen with a baby, en caul births are believed to spiritual and magical in many cultures and traditions. People believe it brings good luck to both parents as well as the child. One of the myth suggests babies born en caul can never drown. Such births are superstitious and many celebrities are said to be born with a caul.

What happens after en caul birth?

Soon after, when the baby is born en caul, the doctor or the midwife gently put an incision at the sac to open it similar to the opening of a water-filled bag. The water then flows out of the sac and then the sac shrink. Sometimes the baby comes out of the caul soon after the birth, as is referred to as hatching baby.

During birth and well as just after it, the baby will have plenty of air inside the amniotic sac. As such, there is no difference between en caul birth and normal births.

En caul births are very rare to occur. It is so rare that most of the delivery doctors would never witness this kind of birth in their entire careers. These children are thus considered special and fortunate enough.