Duodenal atresia is a rare anomaly that occurs between 1 in 10,000 to 1 in 6,000 live births. It is seen in the small intestine, obstructing the free flow of fluid and nutrients along the digestive tract of the fetus. Sometimes it may be associated with other problems like down syndrome or heart defects. But if not, the condition is easily treatable with no complications.

What is Duodenal Atresia?

The first part of the small intestine is the duodenum and its opening, the lumen, remains open when the fetus is developing in the womb. This opening helps the free flow of food and fluids through the digestive tract for fetal development. In duodenal atresia, there is a malformation of the lumen that is it is either absent or completely closed off, thus obstructing the flow. This blockage, or atresia, results in polyhydramnios an abnormal accumulation of amniotic fluid as it is being swallowed and digested by the fetus. This can subsequently present complications during pregnancy. So, the diagnosis and treatment of this congenital condition are important. 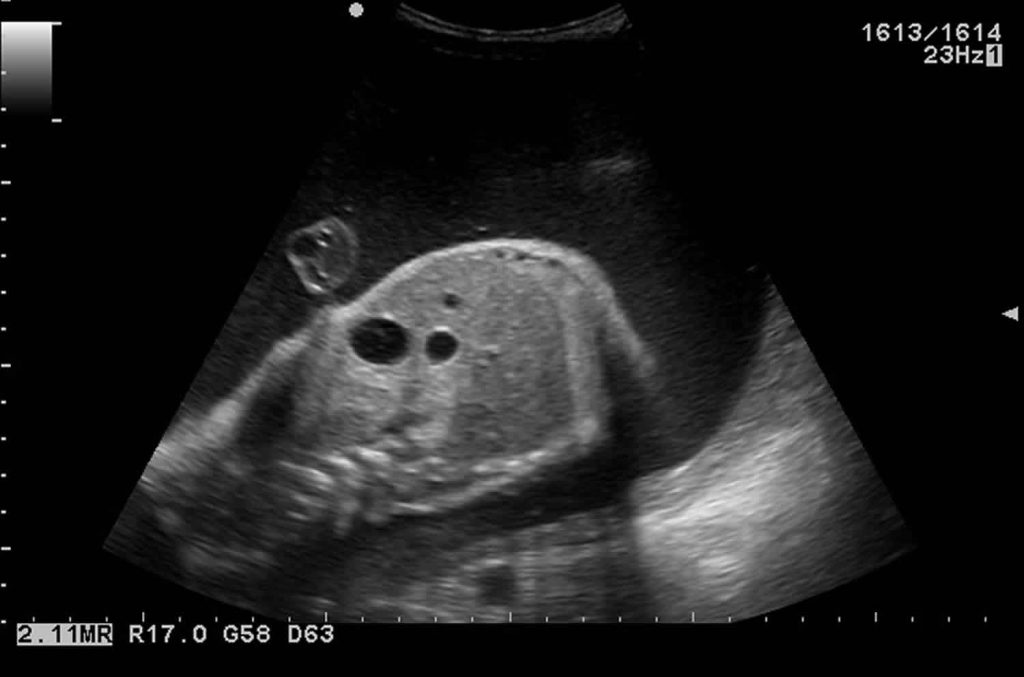 There is an incomplete closure of the lumen by a mucosal diaphragmatic membrane with an intact muscle wall. This is called a duodenal diaphragm.

The exact causes of duodenal atresia are not known, but it is believed that it could be a result of genetic factor which cannot be controlled by the parents. If both the parents have the same trait of the same defective recessive gene, which is then inherited by the fetus, it will lead to disorder. However, if it gets one normal gene and one defective gene, it usually will not show symptoms but becomes a carrier of the disorder.

It could also be due to blood vessel defects in the embryo which result in decreased blood supply in the duodenum which will cause the duodenum to be absent.

Another cause of the anomaly can be down syndrome and 1/3rd of the babies born with duodenal atresia are diagnosed with this. When a child is born with three copies of chromosome 21 instead of two, then a condition called trisomy 21 occurs, commonly referred to as down syndrome. This condition leads to physical and intellectual disabilities which are duodenal atresia, heart abnormalities, or problems with vision and hearing.

Signs of duodenal atresia in a child can be noticed before childbirth. Since the condition can cause complications during pregnancy and also put the child at risk, it is important to look for the following signs and symptoms.

It is not easily detectable, signs of it appear on a prenatal ultrasound. However, these symptoms are usually nonspecific, like a dilated stomach.

Are an indicator of duodenal atresia that can be easily spotted on an ultrasound or an x-ray. In a fetus with duodenal atresia, fluid does not flow through the intestinal tract but only accumulates in the stomach and the duodenum due to the obstruction of the lumen. The first bubble is the image of the fluid-filled stomach and the stomach bubble is the fluid-filled duodenum.

In a normal pregnancy, excessive amniotic fluid in the womb is swallowed and digested by the fetus. But for a baby with duodenal atresia, it becomes difficult to swallow it which makes the fluid begins to accumulate in the amniotic sac causing the uterus to become enlarged. This condition is called duodenal atresia polyhydramnios and if severe, can put the mother at the risk of early delivery.

The symptoms may vary, depending upon the severity of the blockage. They may increase or decrease, also not appearing for weeks, months, or even years.

Post-birth, the baby may exhibit a distended or swollen upper abdomen due to the accumulation of fluids in the stomach and the duodenum that has been blocked.

After birth, the baby may vomit bile which is the yellow-green secretion arising from the liver. The vomit, in some cases, is clear or light brown granular matter. Duodenal atresia vomiting occurs a few hours after birth which will be severe and in large amounts.

The newborn will initially excrete meconium stools that are dark-colored stools containing the matter that lines the intestines when the fetus is developing in utero. If failed to do so or after the passing of the first few meconium stools, the baby may become constipated and resist treatment.

A fetus with duodenal atresia is unable to digest the necessary amount of nutrients for growth which may cause the baby to measure small when it is born. Sometimes, babies may also have heart disease, abnormalities in the anus, rectum, small intestine, esophagus, or the genitourinary system (like organs, of the reproductive and urinary system). Physical and intellectual challenges are usually because of down syndrome.

Duodenal atresia can be diagnosed during pregnancy. Signs and symptoms of the condition may be seen during the routine 20-week antenatal ultrasound, however, they usually become visible during the third trimester. For signs of duodenal atresia during the pregnancy, like an enlarged uterus (due to polyhydramnios) or a double bubble in the ultrasound, several diagnostic techniques can be done. They may also be used in genetic testing/screening to confirm if there is down syndrome.

Duodenal atresia, even if diagnosed before the birth of the baby cannot be treated until after the baby is born. Some precautions can be taken to reduce the risks of complications during childbirth.

Though it is treated after the birth of the child, certain interim modalities have to be undertaken to lower the risk of complications during birth. Measures have to be taken to prevent the risk of preterm labor due to polyhydramnios which involves close monitoring of the fetus and the mother. The uterus is frequently measured and its size and internal pressure are investigated. An amnioreduction can be done to remove the excess of amniotic fluid. Other complicating factors such as down syndrome and heart disease are also identified.

The goal of preventive measures prior to childbirth is to ensure a normal vaginal delivery as close as possible to the due date. However, even if the delivery is normal, the baby requires specialized medical interventions which are provided in the neonatal intensive care unit (NICU). Breastfeeding or bottle-feeding milk to the baby is not done, so a nasogastric tube is inserted into the child’s stomach via the mouth or nose. Fluids are provided through the tube and the trapped air is removed as it cannot pass through the digestive tract. Nutrients are fed intravenously. An x-ray and echocardiogram test used to definitively ascertain the presence of duodenal atresia and heart defects is carried out before moving forward with treatment.

Surgery can be done to treat the condition after childbirth. Since the newborn is in a delicate state, doctors need to take utmost care during and after the surgery.

A surgery, either open or laparoscopic, is performed two-three days after birth to fix the atresia. General anesthesia is first administered to the baby. Then, the blocked end of the duodenum is opened and connected to the remaining small intestine at the point of obstruction. There are seldom any complications in the procedure.

The baby is returned to the NICU and put on a ventilator for a few days while heart rate, breathing, and oxygen levels are monitored. For two to three weeks after this procedure, nutrition is provided intravenously until the bowels heal and begin to function normally. Once the baby is able to consume food from a bottle or through breastfeeding and there are no signs of further complications and get discharged from the hospital.

Duodenal atresia has an excellent prognosis. When the condition occurs without any associated problems, the survival rate is 95%. There are rarely any complications during the procedure. Potential immediate complications after, like leaking from the repaired bowel connections, bleeding, or infections inside the abdomen or wound are extremely rare but they can be operated and rectified. Chances of dehydration, abdominal swelling, problems with intestinal motility or gastroesophageal reflux may be seen. Therefore, it is more likely that a baby with congenital duodenal atresia once operated on will be able to live a completely normal life, without needing long-term or follow-up treatment. But, if the condition is accompanied by other congenital defects like down syndrome, the outlook varies, depending upon the severity of problem.

Duodenal atresia is a congenital defect in a fetus, resulting in an obstruction in the digestive tract. By performing a simple surgical procedure it can be treated after the birth of the baby. With proper precaution and care, complications can be avoided so that the child can go on to lead a healthy life without further treatment. However, in instances where the condition is supplementary to other problems like down syndrome or heart defects, there are long-term effects that require further treatment.

201 Sexy Hot Boy Names for Your Baby You Can Choose...