Most of the people who come across the Chinese Gender Predictor usually just ignore it thinking it to be just another prank or useless magic trick. Indeed, the name sounds like the recent applications on Facebook. But if you have such a judgmental approach towards the Chinese gender calendar, you are going to miss out on this amazing age-old technique.

The Chinese gender predictor is, as the name suggests, a technique to determine the gender of a child before birth. This is an astrology-based method that is the counterpart of the scientific methods such as the Shettle’s method of gender predictor. While the scientific methods are almost bound to be true, as it is a certified long-drawn process that is carried out by a specialized person or with the use of efficient instruments, the astrology-based methods are the controversial ones. 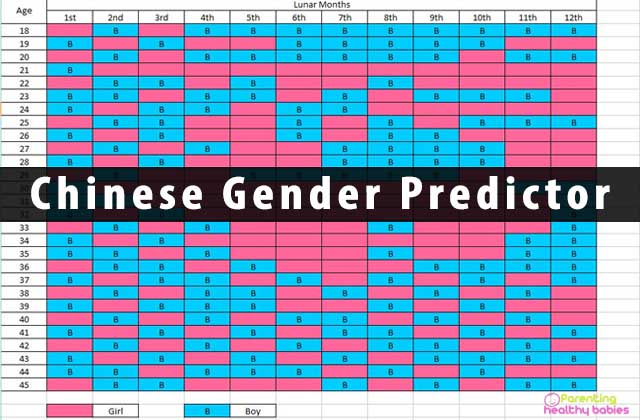 The Chinese gender predictor is based on the Chinese gender calendar that predicts the gender of the baby based on the lunar age of the mother and the date the child was conceived. The gender chart first came into existence during the rule of the Qing dynasty in China between 1644 to 1911. If you are a mother-to-be and most importantly have the right charts, then you can easily use this technique to see if your child will be a boy or a girl.

Obviously, there should not be any reason at all to know about your child’s or children’s gender as you will love them anyway. But sometimes the curiosity is just too much to be bear and rightly so, the exhilaration of a new responsibility and the excitement of a new life is something that a lot of people in this world do not get to cherish. Above all this, there are relatives who are always hiding around the corner to get a sneak peek into what is going on in your family.

The Chinese gender predictor is often judged badly because of its failure to predict the gender correctly in certain cases. First of all, it is important to note that this procedure is an ancient one and has been made up by star-gazers or astronomers who based their predictions on the basis of the alignment of stars and constellations. However accurate anyone may claim the Chinese gender predictor to be, sexual reproduction is all about natural selection and nature never ceases to surprise you. So, if you see that your child is not of the same sex as the predictor had predicted there is no point in blaming the technique and feel disappointed in a time when you should be rejoicing.

The accuracy of the Chinese gender predictor is really a matter of controversy. While a section of the population is really unsatisfied with the result and say the accuracy is very poor, the other part finds the technique to be useful and claim that the accuracy is 99%. So, in general, it can be said that the accuracy is in between 50 percent and 99 percent. But this is too huge a window to get an idea of any sort about the accuracy of the Chinese gender predictor. There are many things that people get wrong while giving the input that is required for the predictor to function properly. This part is often ignored by many people who think this to be some ordinary straight-forward procedure and this leads to inaccurate results. It is important to get hold of the correct Chinese gender calendar or chart before moving forward.

Some apps that you come across on the internet just use some unverified inaccurate charts and hence may give you a poor result. There are many ways to do this and it is recommended that you check for concordant results for a satisfactory output by the Chinese gender predictor. Although some sites contain many sexist remarks about different genders and some even have some sort of gender “selector” option that tells you what the perfect time for is conceiving so that the baby is of the desired sex which is hideous, it is better to just ignore these and try as many of them out as possible. The next misconception that many people have is that they use the age given in their birth certificates not realizing that China has its own way of seeing things.

The Chinese gender predictor is an ancient Chinese technique and at that time the entire chart was based on the Chinese methods of measuring a year, month and day. In order to use the predictor, you will have to know of your lunar age at the time of conception. The lunar age is, of course, different as it is according to the Gregorian calendar. The difference is that the Chinese calendar is based on the phases of the moon or it’s phase cycle while the Gregorian calendar is based on the Earth’s rotation around the Sun. It is, however, quite easy to convert your age, the age that you know and is in your birth certificate to the lunar age and many automated Chinese gender predictors do this automatically. It is still recommended that you get the lunar age separately using a simple converter that is available online and is free and then gives the input.

It is imperative that you get these things correct in the first place for the Chinese gender predictor to function to its highest accuracy. There is no harm to try this out as it requires minimal effort and you can do this thing from your home. But there is no guarantee that the prediction will be correct or not in the end. But whatever the outcome may be, it will be the beginning of a new phase of your life, a lucky one full of sweet and sour memories. So, be happy and enjoy the moments that come along your way as every step ahead will be new and more exciting than the previous one!

Must Know Benefits of Cochlear Implants in Infants