Trichotillomania isn’t a word we come across casually. It is the name of a lesser known disease. A child who suffers from trichotillomania feels strong urges to pull out hair from his/her head (or from other parts of the body). In this article, we will learn about the disease, its symptoms, diagnosis and treatment.

A Guide for Trichotillomania in Children 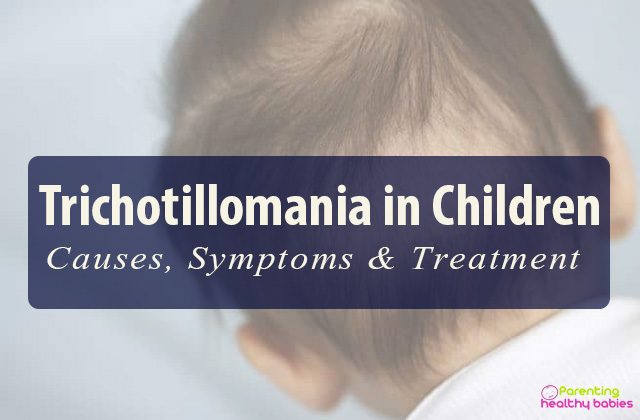 Trichotillomania is a body-focused repetitive behavior, which is classified as an impulse control disorder. This disorder is characterized by the urge to pull out hair from the scalp or other parts of the body, such as the eyelashes, brows, back, arms legs and even genitals. However, pulling hair out from the scalp is the most common. Sometimes the hair pulling is intentional because patients have been known to state that pulling hair out makes them feel good. However, this is not always the case: not everyone with trichotillomania pulls his/her hair out intentionally.  Kids often pull unconsciously, and may not even be aware or register that they are doing so. However, trichotillomania is not a disorder that affects only children- it can affect people of any age.

If your child has trichotillomania, you may notice unusual behavior such as pulling hair out in patterns or pulling it out strand by strand. About 50% of those affected by trichotillomania impulsively put it in their mouth afterward.

Being a largely behavioural disorder stemming from mental areas, there isn’t one particular reason that can be attributed to as being the causal factor of trichotillomania. It is probably a combination of genetic and environmental factors that bring about the disorder in individual.

Factors that tend to increase the risk of trichotillomania:

Family history: Those who have someone in the family affected by the disease are more likely to develop it, thus showing that genetics may have a role to play.

Age: Trichotillomania is often seen developing during the early teens, between the ages of 10-13 years.

Other disorders: People who have trichotillomania may also have other disorders, such as depression, anxiety or obsessive-compulsive disorder (OCD).

Stress: Severely stressful situations or events may trigger trichotillomania in some people.

Read More: 8 Must Know Causes for Hair Loss in Children

What are the symptoms of trichotillomania that you should look out for?

There are some telltale signs that may indicate that your child is affected by this disorder.

If you notice any of these symptoms in your child, it is very likely that he/she has developed trichotillomania, and you should consult a doctor immediately.

Diagnosing trichotillomania is done through a series of steps, usually:

Read More: Why is My Newborn Baby Covered in Hair?

Since trichotillomania is a mental disorder, it is primarily treated by behavioural therapy. Cognitive behavioral therapy (CBT), which is used to make children more aware of their hair pulling, is very helpful. Through CBT children can recognize and try to control the emotions and triggers involved in their hair pulling. Sometimes something as simple as wearing loud, dangling bracelets can make kids aware of their activities and help them stop the impulsive hair pulling on time.

After the children can sufficiently recognize these habits, psychiatrists usually start with behavioural reversal techniques. Sometimes they might resort to techniques and little tricks that will make it hard for the child to pull out his or her hair. For example, wearing bandages around the fingers can make it difficult to grasp at hair and pull it out. Sometimes even simpler techniques such as wearing hair back instead of loose, or putting it under a hat puts hair out of reach in a child under treatment and can help with preventing him/her from pulling it out. For those who play with the hair after pulling it out, doctors suggest keeping their hands busy with paper clips, pencils and other textured objects to satisfy the sensation and keep their hands distracted.

There aren’t really any medications that are designed specifically to target trichotillomania, but if the disease stems from other disorders such as depression or anxiety disorder, then the doctor may prescribe medications for those. However, this is very rare in case of children.

Trichotillomania is not a very well known disease and can take some time to make itself obvious. However, once your child has been diagnosed with it, you must get all the help you can to cure it. It often goes away with some therapy and does not leave any lasting imprints. However, if not treated on time, the symptoms can get more and more severe and last for years on end. Therefore, you must not take this disorder for a bad habit that will go away on its own; it is a mental disorder and should be treated as such.

7 Awful Side Effects of Force-Feeding Children

Domperidone for Reflux in Children: Dosage, Uses, Side Effects and Precaution