Pregnancy is a wonderful time in any woman’s life. But, for a woman taking antidepressants, the time can be terrifying as well. One of the major concerns with antidepressants is the risk they pose to the growing fetus. Let us have a look at whether it is safe to take antidepressants when you are pregnant.

Any kind of medication can pose a risk during pregnancy. It is the same case with antidepressants. What you need to understand is the severity of your current symptoms. You also need to have a clear idea of the treatment that you are undergoing.

Untreated, your symptoms can make it more difficult for you to handle the pregnancy. Not taking proper medication will also lead to consequences. It can lead to increased risk of suicide. You may also become unable to care for yourself and your unborn baby.

Can pregnancy affect an existing case of depression?

Earlier, people believed that pregnancy hormones were effective in protecting women from the symptoms of depression. However, latest research suggests that this is not true. In reality, pregnancy is more likely to trigger a wide variety of emotions. These emotions make it more difficult for you to deal with depression.

Pregnancy can infact trigger your existing symptoms to increase in intensity. That is why it is important to be aware of the severity of your specific condition. 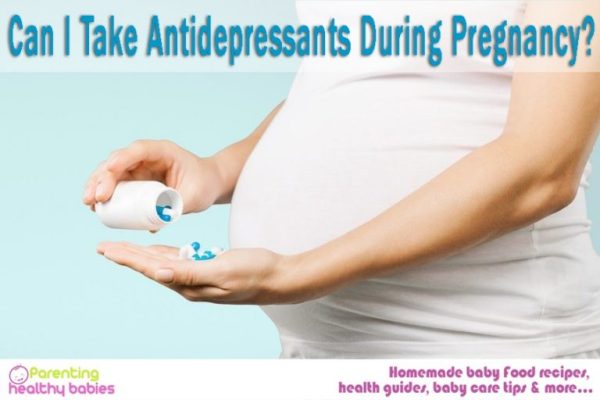 What complications can be caused by antidepressants in my baby?

Research has shown that all kinds of drugs used for treating depression cross the placenta. These can be found in the amniotic sac. Their presence is also found in your breast milk. There are some mood lifters that are considered to be risky during pregnancy. These may cause certain complications, though they are rare.

Some of the risks that may be increased by the use of antidepressants during pregnancy are:

You baby may show some problems just after birth, if you take these medications in the third trimester of your pregnancy. These symptoms are usually short-lived and mild. They can include:

Is antidepressant an option during my pregnancy?

The decision is dependent on the balance between the possible risks and the benefits. You need to remember that not everyone needs to take medication for depression. If your doctor feels that he or she can lower your dosage he or she will do so. In fact, they may even avoid prescribing you an antidepressant during pregnancy.

Research has shown that risks of complications for the mother and her baby, due to use of antidepressants during pregnancy, is quite low. The cases of your baby having birth defects are also very low.

However, there are few antidepressants that are considered absolutely safe to be used during pregnancy. Some types have been associated with serious health problems and  complications in babies.

What are the antidepressants that are ok to use during pregnancy?

You must remember that no antidepressant medication has been proven absolutely safe to use during pregnancy. However, there are certain ones that are usually thought to be ok to use during this time. These include:

You must remember that no antidepressant medication has been proven absolutely safe to use during pregnancy. However, there are certain ones that are usually thought to be ok to use during this time. These include:

Some research conducted regarding the use of sertaline, fluoxetine, and citalopram, associate these elements with a serious but rare newborn lung issue. This is known as persistent pulmonary hypertension of the newborn. This can occur when the drugs are used in the last half of your pregnancy.

Certain others cases of rare birth defects have also been associated with the use of antidepressants during pregnancy in some reports. However, the overall risk factor remains very low.

Which are the antidepressants that I should avoid during pregnancy?

There are certain antidepressants that are best avoided during pregnancy. One of these is the SSRI paroxetine. Certain research suggests that this maybe linked to a small rise in fetal heart defects.

Apart from this, Monoamine Oxidase Inhibitors (MAOIs) are also generally discouraged for use during pregnancy. These include:

Research suggests that MAOIs may result in limitation of growth in your fetus. That is why its use is generally discouraged at the time of pregnancy.

Can I switch my antidepressants during pregnancy?

The decision to substitute your medication or stop it is totally dependent on your health care provider and you. It is natural for you to be worried about the possible risks to your baby. However, you need to carefully assess these risks with the possibility of a relapse.

You need to consider the fact that discontinuation or substitution of your antidepressants might not have the desired response. It can fail and you can suffer from a depression relapse.

What are the things that can happen if I stop taking the antidepressants during pregnancy?

The most serious side effect of stopping antidepressants during pregnancy, is the chance of depression relapse. In addition to this, sudden stopping of SSRI can also give rise to the following symptoms:

You may also find it increasingly difficult to deal with taking care of yourself and your baby during this time.

So, can I take antidepressants during pregnancy?

If you are suffering from depression and are pregnant, it is best to talk to your doctor about your medication. In case you are looking to get pregnant, it is advisable to take the doctor’s opinion before trying.

In certain cases of mild to moderate depression, psychotherapy alone is enough to manage the symptoms. Your health care provider may suggest counseling sessions or other such therapies. In case your symptoms are moderate to severe, the risk of relapse are increased.

Risk of relapse can also increase in case you have had a recent spell of depression. These risks are greater during pregnancy when compared to the side effects associated with the medications. The decision will have to be based on a balance between the risks of antidepressants and the possibility of a relapse.

Deciding the method of treating depression during pregnancy is not an easy task. You need to think carefully about the risks and benefits of taking antidepressants during pregnancy. You have to work with your doctor closely during this time. This is very important for making an informed decision from the available choices. You need to choose the best chance for long term health, for both your baby and yourself.