Can pregnant women eat shrimp? Shrimp is a seafood loved by many foodies around the world. But when expecting, one has to be extremely careful in choosing the food one consumes. Seafood though generally considered very nutritious can sometimes be contaminated with mercury making it unfit to eat.

Seafood is a rich source of DHA(docosahexaenoic acid, which is considerably essential for fetal development. The elongated omega-3 fatty acids mostly found in shrimps and other seafoods are optimal for fetal neural development. But at the same time the high concentration of methyl mercury a neurotoxin found in seafood are considered potentially harmful for the neuro development of the baby.

So, to be safe one has to carefully choose seafood that has low mercury concentration and shrimp is one of them. Consuming shrimp which could provide 12oz or 340gms of omega-3 fatty acid per week is presumably safe for pregnant women.

The benefits of having shrimps are numerous:

*Highquality protein helps in the development of the fetus.

*Shrimps are a storehouse of vital vitamins and minerals necessary for fetal development.

To top all these, they boost immunity,lower Bp levels, improve eye vision etc.

Though shrimps are a treasurehouse of vital nutrients, most of them are farm-raised which expose them to a lot of parasites and contamination. So it is better for pregnant women to avoid shrimps harvested in farms abroad and feed on locally caught sea shrimps. Undercooked and raw shrimps are also advised not to be taken by mums-to-be.

Finally, weighing the pros and cons it is best to consult your doctor to clear off any lingering doubts. 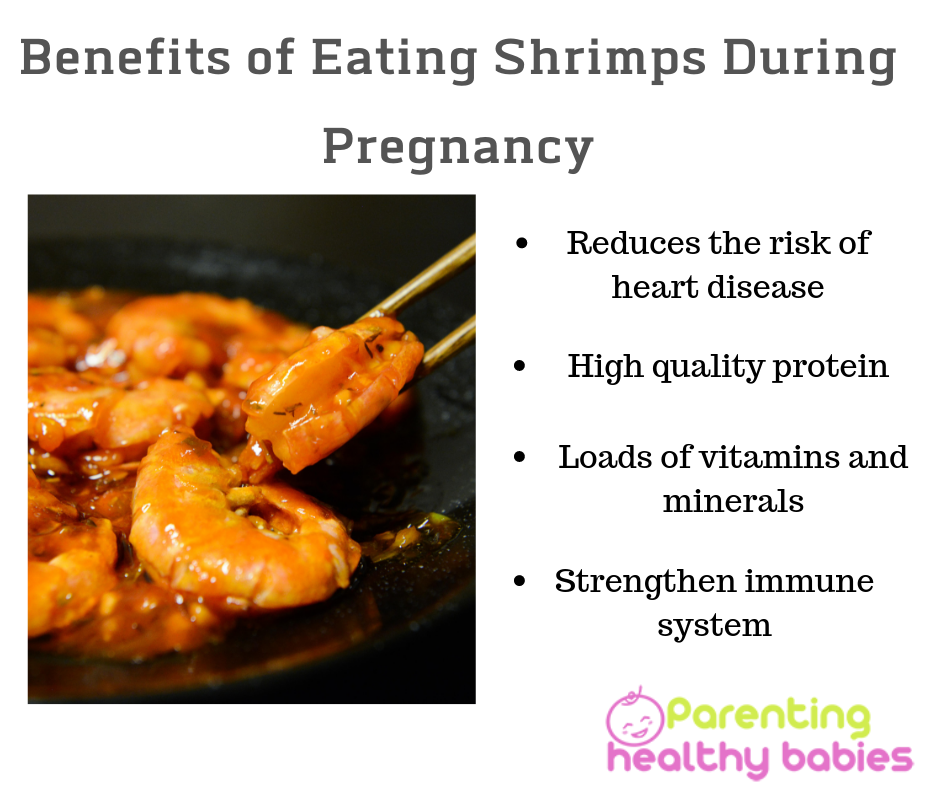 There goes an old wives’ tale which says, “ when you are pregnant you are eating for 2”. Yes of course you’re eating for 2 but not quantity wise, as a teeny tiny fetus doesn’t need big quantities of food. But quality wise your diet should be rich and balanced so as to provide nourishment to you and your developing baby.

Are shrimps safe during Pregnancy?

Today we are going to discuss whether shrimps are safe to be consumed during pregnancy and can pregnant women eat shrimp.

Seafood is a rich source of DHA-(docosahexaenoic acid), which is an essential nutrient beneficial for the developing fetus. Fish and other seafood are primary dietary source for elongated omega-3(n-3) polyunsaturated fatty acids (PUFAs). Adequate intake of elongated omega-3 PUFAs during pregnancy, particularly docosahexaenoic acid (DHA), is essential for optimal fetal neuro development.

According to a qualitative study done by “The American journal of clinical nutrition”, women who ate more than 340 gms of seafood a week have kids with significantly higher IQs than those who ate no fish. Seafood lovers would be elated to know this but wait, there are some conflicting findings too. Sea food can be simultaneously toxic too because of mercury contamination. Fetal brain is particularly sensitive to methylmercury a neurotoxin found in fish.

These studies have created a confusion about appropriate fish consumption while being pregnant. The research based analysis has put forth two important points regarding seafood consumption during pregnancy :

1) Seafood is a rich source of omega-3 fatty acids which is vital for the neural development of the baby.

2) But at the same time sea food could be contaminated with mercury which have adverse effects on fetal neural development.

So, the conclusion is that expectant women should be very careful while choosing seafood to eat. Fish with high levels of mercury should be avoided and sea food consumption should be limited to the amount which provides 12 oz or 340 gms of omega-3 fatty acids per week.

Now coming back to shrimp, shrimps are believed to be safe to eat during pregnancy, because they fall into the category of low mercury seafood. However under-cooked shrimps or the raw ones should be avoided to be on the safer side. A lot of it also depends on where the shrimps were caught. Local authorities could help in knowing which water bodies have higher levels of mercury concentration in our surroundings. So awareness is very important, as awareness is half the battle won.

Shrimps are rich source of vital nutrients required by the mum and the child, some of which are listed below :

Shrimps have less than 2% of fat, and whatever little fat they have is mostly unsaturated fat. So eating shrimps can help lower cholesterol and reduce the risk of heart disease.

Compared to other meat and chicken, shrimps are excellent source of high quality protein, which is essential for both mum and child.

Loads of vitamins and minerals

Shrimps are storehouse of lots of vitamins and minerals like iodine, zinc, potassium, phosphorus and B group vitamins.

Most expectant ladies are immuno-compromised. Eating shrimps help in boosting up the immune system, which in turn help in warding off diseases and infections.

Apart from this they lower Bp levels, improve eye vision, and add glow to our skin and hair.

Farm-raised shrimps can be dangerous for pregnant women

Though shrimps are filled with goodness and taste there is also a down side to this. Today most of the shrimps available for consumption are farmed ones. Let us see what they are.

Instead of being caught at sea, large quantities of shrimps are grown in man made ponds containing a mix of ocean and fresh water. This practice is common in the coastal countries like Thailand and Indonesia. These are often referred to as farmed shrimps.

Research shows that eating farm raised shrimps abroad could be very dangerous, as they could lead to serious illness and infections. The shrimp farms are run under very poor conditions. The waters are overcrowded and quickly polluted with waste, which can infect the shrimp with disease. Ingesting these could lead to listeriosis a common food poisoning among pregnant women. So avoid imported shrimps and go for wild shrimps caught in the local water bodies.

Finally, have a word with your doctor to clear any lingering doubts.

Shrimps are among the seafoods that are low in mercury levels and hence safe for consumption during pregnancy. With goodness and taste overloaded how could one resist eating this sea delicacy!!

11 Tips To Get Rid Of Belly Fat Post Delivery

Is It Implantation Bleeding or a Chemical Pregnancy?