Sharks and minnows, where next, the puzzle game, water balloon relay, candy hunting, capture the flag, marathon challenge, pony express, butterfly running, kick the can and shadow tag are some of the best running games for your child.

With the technological advancements and latest digital inventions taking over the interests of this generation, it is becoming a little difficult to indulge the kids into running games. In spite of the enormous number of interesting running games available for the kids, they opt to rely on their mobile phones or the video games. Running is a great method to get kids into exercising and involving them more into physical activities. Whether it is your backyard, an empty field or some open space, we have got a list of 11 best running games for your child. Read below to find more: 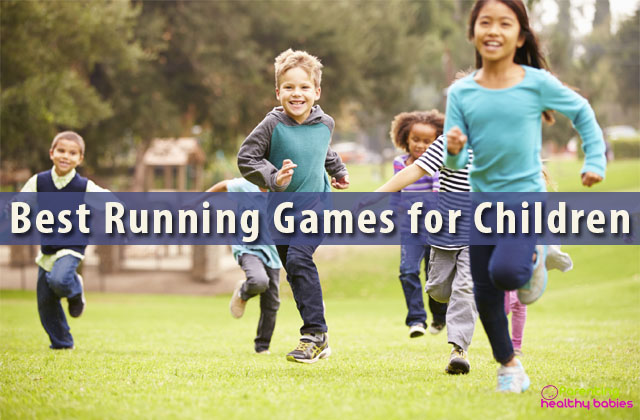 Oh, damn! This one is my personal favourite since childhood. All the kids have to do is, just keep on running without getting tagged.

Split the kids into two groups. There will be one kid standing in the middle of the field who is the ‘shark’ and the rest are ‘minnows’ who will be asked to spread across the field. As and when the whistle will be blown, the minnows will spread throughout. However, they have to avoid being tagged by the shark. If in case a minnow is tagged, it will become a shark and run after other minnows. Whoever will be the last minnow left, will be the winner.

So, this one is pretty intensive that requires a lot and lot of running.

You must ensure that wherever you are planning to play this game, should consist of a number of locations you can choose from. For instance a garden, a fountain, swings or any other thing. Write down the name of the places on a number of small chits and put them all in a bag and then, ask the supervisor of the game to randomly take a chit out and announce the name of the place written on it. After the announcement, all the kids will immediately run to that very place. Tired?

This game involves finding and putting together the puzzle pieces placed at various locations.

I swear water games will forever remain the best of all!

This one is played a lot similar to the normal relay games, but here the kids will be using water balloons and not the batons used in normal relay. You will require a number of water balloons and buckets. The kids will have to balance the balloons and run as fast as they can, making sure that they do not drop the balloon. If they do so, they will have to run back to the bucket and take another balloon and resume the game from the point where they last dropped it. A water balloon will be awarded to the winning team plus thirty additional seconds to soak the other team.

Run and collect as many candies as you can.

Play this one in an open field and spread a number of candies throughout. All the kids have to do is, collect the candies and place them on the starting point of the game. You can also go for a single candy at a time which means, collecting one and placing it on the point, then getting another and so on. Whoever collects the most of the candies wins the game.

This one involves plenty of running and most importantly, team work. So, make sure that you have got enough number of kids to get this game started.

Divide the kids into two teams. Now mark the centre of the field using an object and place flags of two different colours and plant them both on the opposite sides of the field, just a few metres away from the centre. On the sound of the whistle, the kids will run to get the opponent’s flag without being caught by that team. If he/she gets caught, then they will be sent to the jail. You may call a specific place on the field as jail and remember, that the person will only be back when he/she will be freed by some other member of his/her team.

This game is very much similar to the actual marathon.

But as kids cannot at once run for such long distances like 30-40 kms. So, what we can do is, split the distance into several segments. For instance, you may split the first part for 2 km (called as yellow belt) or so then the other for 5 km (called a s black belt) and so on. Whenever a kid completes the given challenge, he/she will be rewarded with a coloured t-shirt.

This one will be just perfect if you will to bring out your child’s competitive spirit.

Divide the kids into teams and ask them to form a line right on the opposite sides of the circle. When the whistle will be blown, one kid from each team will start running in the same direction. They will then tag another person from their team without being caught by the other team. The game will continue in the same manner and the team that gets all of their members run around the circle wins the game.

If you want to keep your kids entertained and shaped at the same time, then this one is for you!

Take some cones and use them to make a large butterfly on the ground. Now, this butterfly will have several different sections, consisting of running, jogging and walking. The centre line will be known as the ‘sprinting lane’, whereas, one side of the butterfly will be the ‘jogging lane’ and the other one will be the ‘walking lane’. Now, ask your kids to follow the instructions and let them run, walk and jog around the butterfly.

Try to kick the can and escape to make your team win.

Love the tag game? You will love this too!

This is just another version of tag in which you will be required to tag the shadows of the other people with your feet instead of using your hands and tagging their whole body. So, you must play this one on a sunny day so that you do not find any difficulty in playing this one!

Weren’t these running games entertaining? Well, you can also use your own imagination or add on any new rules to the game just in case you want to make it interesting for your little one.

21 Best Board Games for your 3yr Old Preschooler