The most visible spokesman and leader of the civil rights movement was Martin Luther King Jr. An American Baptist minister and activist, he is remembered with respect for his role in using nonviolence and civil disobedience, based on his Christian beliefs and on the principles of Mahatma Gandhi.One of his many oft-quoted statements was, “The time is always right to do what is right.”

To honour him, Martin Luther King Jr. Day is celebrated in America as a federal holiday. It falls on the third Monday of January, around King’s birthday.

Here are 15 Martin Luther King books that children can read and be inspired by:

Written by Bonnie Bader, this book presents King’s life history and places him in its historical context so that middle school kids can easily understand it. It has 80 black-and-white illustrations too.

These famous words were once spoken by Martin Luther King Jr. Written by King himself, he made a speech during the March on Washington in 1963. With these words, he referred to an ideal state where freedom and equality of the people would be normal. An audio CD of his speech comes with this book.

Written by Marion Dane Bauer, this book is written in a child-friendly style with lyrical copy and is well-illustrated. 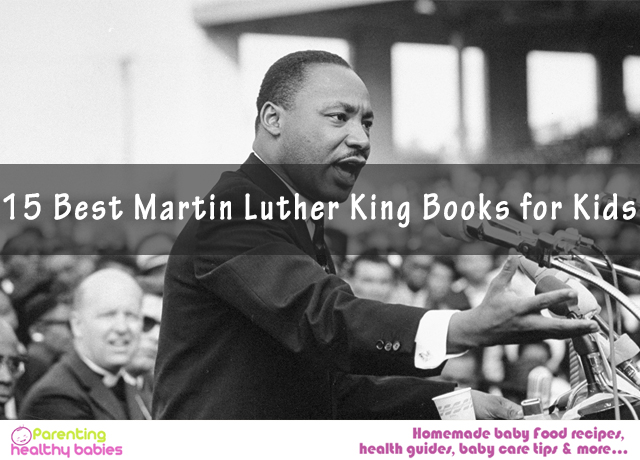 There are barely 200 words in this story book which tells children the story of Martin Luther King Jr. Its watercolour illustrations introduces the little reader to an important character of black American history. It is written by Johnny Ray Moore.

5. A Sweet Smell of Roses

Angela Johnson’s story is about two sisters who escape from home to march with King. They dream of a free country in which freedom will be as easy as smelling the flowers. This book is largely stark in black and white, with a few touches of colour on each page, making it dramatic.

6. My Dream of Martin Luther King

7. As Good as Anybody

Richard Michelson narrates the story of Martin Luther King’s childhood and early years and Rabbi Abraham Joshua Heschel, who come together to fight for social justice. There are beautiful illustrations with matching text.

Brad Meltzer’s lively picture story book sends across the message to kids that everyone has it in him or her to be a hero. Easy-to-understand text and cartoon-type illustrations make this book interesting and easily understandable to kids.

Christine King Farris, King’s older sister, records some of her most precious memories of her younger brother Martin. They range from playing pranks to playing the piano to an important experience in childhood which started the fight against racism and discrimination in King.

10. Free At Last: The Story of Martin Luther King, Jr.

Angela Bull presents a biography of King that gives a true insight into his life, ranging from his childhood till his death. There’s more information in the many sidebars and the text is complemented by very good illustrations, making it a must-read for middle school kids.

King’s niece and the author of this book, Angela Farris Watkins gives a personal tribute to her very impressive uncle and the nation’s influential figure of the 20th century. We are now taken into the life of King at home and share some valuable family moments.

This book serves as an exclusive and exquisite portrait of the one man that shaped America’s thought and future. The author, Doreen Rappaport, traces his life from childhood and intersperses the text with some of his famous quotes with some show-stopping artwork.

The son of this great personality, Martin Luther, III King, is the author of this book. This book is a memoir of the moments that only a family member can narrate.

Doreen Rappaport mixes watercolours with vibrant paper-cut collage. The story narrated here is a combination of King’s famous words, taken from his many speeches.

11 Ways to Teach Kids about Easter

10 Indoor Games That Increase The Intelligence Of Children