Air fresheners have harmful chemicals which are bad for babies. These can cause stomach issues, reproductive abnormalities, cancer and even damage lungs.

An air freshener is a product designed to mask or remove unpleasant room odors. These products typically deliver fragrance and other odor counteractants into the air. They do so through a variety of product formats, including aerosols, candles, potpurri, and gels.

In 1948, the first air freshener was introduced. This product, using technology developed by the military to dispense insecticides, was a pressurized spray containing about 1% perfume, 24% alcohol or other solvents, and 75% chlorofluorocarbon (CFC) propellant. This was able to deliver a fine mist of fragrance that remained suspended in the air for a long period of time. This format of the product became the standard in the industry and sales grew tremendously. In the early 1950s, many companies began to add odor-counter-actant chemicals to their formulas. These were chemicals that were intended to actually destroy or neutralize offensive odors, as opposed to simply masking them with fragrance. Perfumery houses showed these active chemicals were capable of reducing a variety of unpleasant odors, such as cigarette smoke, urine and fecal odors, cooking smells, and amine odors typically associated with fish. Compounds used for this purpose included various unsaturated esters, longchain aldehydes and a few pre-polymers.

Are air fresheners safe for my baby?

Despite their popularity, there are concerns that these products increase indoor air pollution and pose a health risk, especially with long-term exposure. Air fresheners release volatile organic compounds (VOCs) into the air. A VOC is a type of chemical that turns into a vapor or gas easily at room temperature. Health problems are thought to occur from the chemicals in the air fresheners and from their secondary pollutants. Secondary pollutants are formed when a product’s chemicals combine with the ozone already in the air. Even when these products are used as directed, there are concerns about health problems with repeated exposure.

So, the answer is no, air fresheners aren’t safe for your baby. In fact, they are really detrimental to your baby’s overall health. Find out all about the side effects of air fresheners below- 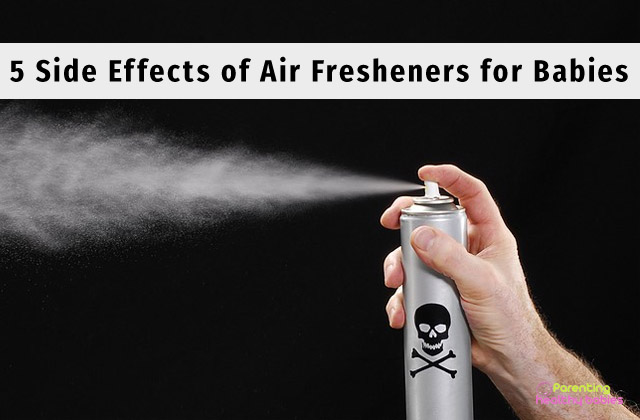 This potent cocktail of toxins is especially harmful to newborns. The use of air fresheners in homes has been connected with an increased risk of earache and stomach ache in babies. The study also found that new mothers suffered from more headaches and depression if they heavily relied on commonly available air fresheners to keep air pleasantly scented.

Babies frequently exposed to aerosols were one fifth more likely to suffer from stomach disorders, diarrhea and cramps. Fumes from VOCs found in air freshener could trigger asthma attacks as well as allergic reactions such as watery eyes and skin irritation, lightheadedness and nausea.

One of the primary concerns health experts have about plug-in air fresheners is their wide-spread use of phthalates. Phthalates, which are also found in many plastics, aerosol sprays, paints, pesticides, cosmetics, and fragrances, are notoriously disruptive to the body. Most phthalates are well known to interfere with production of the male hormone testosterone, and have been associated with reproductive abnormalities. Airborne phthalates can cause allergic symptoms and asthma. Even trace amounts of phthalates can accumulate to cause these harmful side-effects.

Air fresheners typically contain another toxic compound that absolutely is: Formaldehyde. Formaldehyde is a well-known human carcinogen that has been definitively linked to cancers of the nose and throat. It is also known to cause ongoing irritation of the throat and airways, potentially leading to dangerous infections, frequent nosebleeds, asthma, and other respiratory ailments. These risks are particularly elevated in the elderly, infants, and people with compromised immune systems. Women who used plug-in air fresheners during gestation were statistically far more likely to have babies that suffered from serious lung infections.

Compounding the risks posed by formaldehyde, most major brands of plug-in air fresheners contain a chemical known as naphthalene. Naphthalene has been shown to cause tissue damage and cancer in the lungs of rodents in laboratory studies. It’s plausible to assume that it causes similar effects in humans.

Remember that the best and healthiest solution to most unwanted odors is simply to have a clean and well-ventilated home. If your home suffers from musty odors, it’s probable that you have a hidden mold infestation in your ventilation system. Rather than masking the symptoms, call in a professional home air inspector to assess the problem and suggest remediation strategies. Always remember that at the end of the day, nothing is more important than your baby and your family member and most importantly, you.

How Do I Get My Child Tested for Dyspraxia?