So, when do babies start teething? And, how do you know when they do? Today we take you through a few quick details on when kid’ teeth, the symptoms and how to handle it. Read on for more.

When Do Babies Start Teething?

Teething in babies is the time when his/her first set of teeth start breaking through the gums. Your toddler’s gummy smile will now be replaced with smile in small teeth. The first teeth appear right in the middle in the upper and lower gums and the baby looks really adorable when he/she smiles with these tiny pairs of teeth. Slowly and gradually, the other teeth also develop and grow. This first set of teeth is known as primary teeth. Teething might come with real problems for some babies, but the process is as normal as walking, crawling and talking and hence there is no need to worry for the same.

Read More: When Should I Start Brushing my Baby’s Teeth? 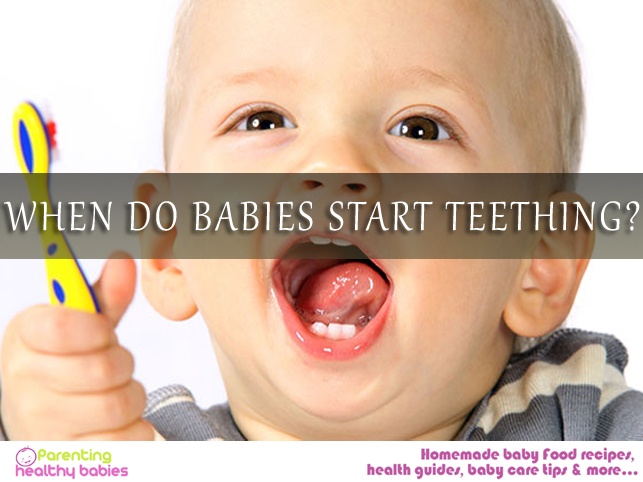 Most parents keep waiting for the time when their baby gets his/her first tooth. It is like a milestone in the life of the child and evidence that he/she is growing and developing in a healthy manner. Interestingly, the time of teething can vary from one child to another. The right and typical age for the first tooth to appear is approximately around 6 months. However, teething can start taking place right from 3 months to 12 months in a child. Many kids have late teething and there is no need to worry on that. If teething does not start after 12 months, consult a paediatrician. By the time the kid is 3 years old; all 20 primary teeth are seen. Basically, right from birth the baby has teeth underneath the gums, which start emerging with time. Though the timing of teething might vary from one infant to another; the pattern in which the teeth emerge remain almost the same in all kids.

What are the common symptoms when babies start teething?

Teething in babies come with very prominent symptoms. When the baby is in the age group of 4-6 months and show these symptoms, you can guess that these are due to teething only. Some of the most prominent signs and symptoms include:

Order in which teeth appear in kids

It is interesting to know that when teeth start showing in infants, there is a particular pattern in which it happens. Though there might be some exceptions, but in most of the kids, the same pattern takes place. Kids have lesser numbers of teeth (20) than adults (32). The lower front teeth make the first appearance, followed by the upper front teeth. These teeth are the central incisors. After these, the lateral incisors make an appearance. These teeth are the ones that appear on the right and left of the central incisors on both sides. Third variety of teeth that come in kids are the canines followed by the first molars and second molars. All these teeth make an appearance as the child grows from 6 months and reaches up to 3 years. Primary set of teeth is ready once the kid reaches 3 years of age.

Teething kids love to chew on anything and everything under the sun. And believe it or not, this is for good reason. The chewing action provides a kind of counter-pressure on the gums and the ache of the new teeth pushing through the gums is relieved to quite a certain extent. Give the kid rattles, soft but thick rubber teething rings, chewy toys and similar things. Make sure that they are thoroughly cleaned as the child will put these items directly in the mouth. You can also give your baby a piece of cucumber or carrot or hard fruits like apple, guava etc on which they can nibble to deal with teething ache. Once the teeth start coming out one by one, the problems start getting under control.

How to Choose Baby Gates? – Your Home Security System for...

Is your Cell Phone Harming Your Child’s Brain?