Teenage is the gateway between childhood and adulthood. Children start becoming sexually mature. This age group between 13-19 years is known as adolescence or teenage. Children undergo lots of physiological, hormonal and anatomical changes. At this age, as a parent it is very necessary that you teach them and guide them to adulthood. You should talk to them freely about the changes that will occur in their body, what are those changes and why are those happening. Right information from a trusted source will prevent them from taking any wrong and rash decisions. 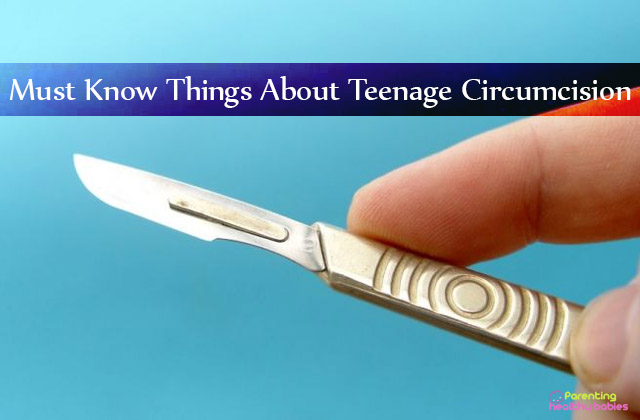 There is a flap of skin covering the rounded tip of penis and safeguarding it, known as foreskin. The skin comprises of nerve endings, blood vessels and small amount of muscles. Circumcision is a surgical procedure, where this skin is removed exposing the glans penis. This procedure has various advantages as well as some complications.

Why is it done?

It is studied that circumcision reduces the risks of sexually transmitted diseases like gonorrhoea, syphilis, herpes, hepatitis and human immune deficiency virus. It also prevents many urinary tract infections by avoiding the bacterial build up. But as every other surgery it has its own risks like bleeding, pain, psychological trauma and sexual dissatisfaction. Conditions in which it is done are-

Like all the surgeries even this surgery has certain complications, these complications are very rare. Some of them are as follows-

Consult your doctor if-

Maintaining hygiene is a golden rule of prevention of diseases. Proper cleanliness and genital hygiene should be maintained without any exception. Even after circumcision care has to be taken.

If you wish your child to undergo circumcision when not medically important, you should talk to him about it and consider his opinion about it.  Though your teen is not yet an adult, he may face psychological disturbances due to circumcision. He may face some problems which he might not be able to talk about. So it is very necessary to talk to your kid openly. Also it is very important that you teach your child about maintaining sexual hygiene.

Circumcision lowers the risk of infections but it does eliminate it. Maintaining hygiene is equally important after circumcision as it was before. But after circumcision it becomes easy to do it. Circumcision doesn’t affect sex in any physical way. Only you kid has to be counselled mentally as physiological disturbance may lead to sexual dissatisfaction. All the advantages and disadvantages have to be though and then it has to be done. Someone has truly said parents duties never end; they grow up with the child! Wish you a happy parenting.

Should I Talk To My Kids About The Terror Attacks?