So, your young teen is showing signs of distress? Are you worried that she may be suffering from a binge eating disorder? Binge eating disorder, can have a devastating effects on your young adult. It is therefore important for you to identify the signs of this disorder at its early stages and nip it at its bud. Listed below are a bunch of signs and symptoms that will help you understand if your child suffers from this disorder!

Binge eating disorder is a problem that appears most commonly among teenagers and young adults. This problem can occur in boys as well as girls. Although it is less common than other eating disorders, but can pose harmful effects on health.  Binge eating refers to a disorder that leads a person to eat large amounts of food, much more than what is required, in a single sitting. This further leads to problems like obesity and other related health issues including heart disease and diabetes.

Causes of Binge Eating in Teenagers

The actual cause of binge eating disorder has not yet been ascertained by any research or study. Generally, people with binge eating disorders belong to families that indulge in overeating or put an unnatural emphasis on food. For instance, such families might use food as a reward or a way to comfort or soothe, thus leading to binge eating as a learned behavioral reaction to stress.

Adding further, binge eating disorder is also, sometimes, considered as an undesirable side effect of some specific psychiatric or other medications that can stimulate appetite and might also interfere with people being able to understand or sense that they are full even after eating a meal. However, till date is considered to result from a combination of behavioral, biological, and social factors on the whole.

Overeating is common among teens at times or even regularly. However, overeating occasionally doesn’t indicate a person to be involved in binge eating. Many people suffering from this disorder find eating to be soothing and comforting.

Here are the top 11 signs that indicate a teen to be indulged in binge eating. These can be, however, categorized into various sections, viz. Emotional, Behavioral and Mental, Psychological, and Physical Signs. 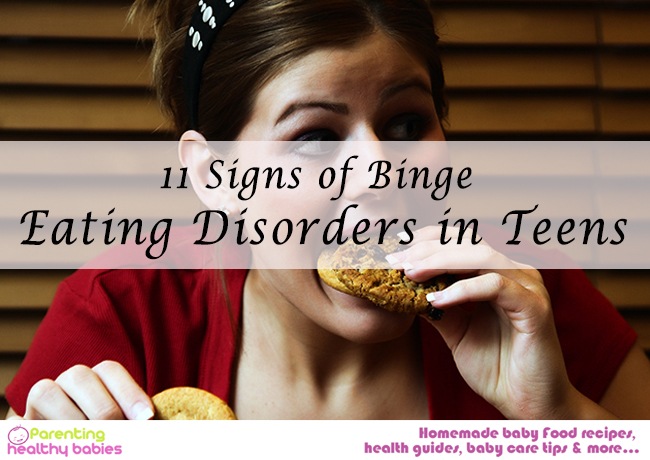 Behavioral Signs of binge eating include signs and symptoms like:

2. Wrappers say it all

Evidence of empty containers and wrappers indicate consumption of large amounts of food.

This refers to disappearance of large quantities of food in short phases of time. Besides, the speed of eating is also different from the normal eating speed.

The emotional and mental signs of binge eating include:

Weight gain is another most obvious symptom of binge eating disorder. Indulging in binge eating is highlighted if your weight increases abruptly.

When you indulge in overeating or binge eating, the weight increases gradually. This increased weight is ought to be borne by your knees. However, besides the knee joint, other joints also get affected by the increase in muscle mass. Therefore, if your teen experiences joint pain with an abrupt increase in weight, chances are that he/she is suffering from binge eating disorder.

Embarrassment includes overwhelming feelings that you cannot control what you are eating and in what quantity.

Depression and anxiety are also associated with binge eating. Many teenagers find eating soothing and relaxing during tense situations or situations that involve anxiety or stress.