Healthy eating and staying healthy is all that a woman requires during pregnancy. During a normal healthy woman gains about 12-15 kilograms weight. This is also essential for the healthy growth of the fetus. The woman needs to increase her diet and this could be done by adding delicious cheese to make dishes even tastier to eat. Many women have cheese cravings during pregnancy. Therefore, they need to know what kind of cheese is healthy to eat and how much amount should they consume during pregnancy.

Are You Craving for Cheese?

Cravings usually occur in a human due to a reason. It can be considered as a way by which the body informs you to have certain nutrients. A strong urge to have cheese indicates that the body needs more proteins, calcium, vitamins, and minerals. Usually, these cravings are seen for unusual foods that arise due to the hormones present in the bloodstream. Same as food cravings many women develop food aversion and start avoiding such food. In ancient times it was believed, the urge of cheese indicates the sex of the baby. But till now no evidence is found in its support. 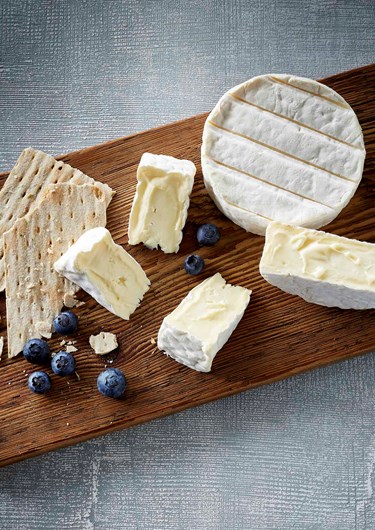 Cheese During Pregnancy: Is it Safe?

Yes, having hard cheese is completely safe during pregnancy because this kind of cheese often contains very less amount of listeria bacteria in it. It is advised to avoid soft cheese especially the blue-veined as well as mold-ripened varieties due to the high concentration of listeria in them. Listeria is a harmful bacteria that causes listeriosis. In a pregnant woman, immunity is already low and thus they become more vulnerable to this bacterial infection. Due to listeria, the unborn baby can be harmed.

Safe and Unsafe Cheese During Pregnancy

Following cheeses are considered to be safe during pregnancy

Such cheese is characterized to have a firm texture and long maturation period. Usually prepared by pasteurized milk or with the milk boiled at high temperature. The high temperature kills listeria and therefore, such cheeses are free from listeria. Some of the hard cheese is –

Soft cheese made from pasteurized milk is safe during pregnancy. This kind of cheese is soft and sometimes may be watery. Soft cheeses such as cottage cheese, garlic and herb roulade, cream cheese, mozzarella, quark, ricotta, and goat cheese without white rind are safe to have during pregnancy.

This kind of cheese is obtained from modified natural cheese. It is characterized to have a homogenous and flexible texture. The process of heating makes processed cheese safe during pregnancy. It contains salt emulsifiers, stabilizers, and other additives, so their use should be limited. Processed cheese like American cheese, Velveeta and cheese whiz is safe during pregnancy.

Cheeses such as Brie, blue brie, Cambozola, Camembert, and Chevre are more likely to contain listeria.

Cheese made from unpasteurized milk may have a high concentration of listeria in them. Some of the soft unpasteurized cheese are Chabichou, Feta, Torta del Cesar cheese and Pyramide are unsafe during pregnancy. Most of them are obtained from cow milk but can also be made from goat milk.

Goat Cheese During Pregnancy: Is it Safe?

Listeriosis due to Cheese Cravings

Intake of contaminated or unpasteurized cheese can cause listeriosis in pregnant women. Thus, one needs to be very careful while selecting cheese as it is hard to identify infected cheese because it lacks any distinct taste or smell. In pregnant women chances of infection are fairly high when compared to non-pregnant women. Listeriosis can harm the baby by increasing the chances of miscarriage or severe illness or even stillbirth of the baby. But if detected early, treatment through antibiotics help in preventing serious complications in a pregnant woman.

Cooking helps in killing listeria bacterium but these are resilient. These can grow back easily in the refrigerator or freezer. Following are some tips to prevent listeriosis during pregnancy :

The Unexpected Side Effects of Pregnancy and Birth and How to...

Calcification of Placenta in Pregnancy: Things You Need to Know