Pyloric Stenosis is looked upon as a multi-factorial trait or multi-factorial inheritance implies that numerous factors are involved in leading to a birth defect. Usually, these factors can be genetic as well as environmental. As a matter of fact, pyloric disorder is more common in male infants as compared to female infants.

Signs and Symptoms of Pyloric Stenosis

Usually, the symptoms of this gastrointestinal disorder begin to show when the baby is about three weeks old. Some common and alarming ones include:

This is another initial symptom of Pyloric Stenosis. Initially, it might seem that the baby is just spitting up quite often, but later it tends to turn into projective vomiting characterized by forceful ejection of breast milk or formula from the mouth. Usually, projectile vomiting occurs soon after the end of feeding. But, in some cases, it can happen even hours later.

Another sign is that the vomited milk might smell curdled due to stomach acid mixed with it. However, the vomit doesn’t contain bile (a greenish fluid from the liver that mixes with digested food after leaving the stomach).

In addition to vomiting, the baby with Pyloric Stenosis usually gets hungry again soon after vomiting. Most importantly, please note that even with the vomiting, the baby might not seem to be in severe pain or look very ill in the first place.

Babies suffering from pyloric disorder generally have smaller, fewer stools. This is because little or no food is reaching the intestines. Yet another symptom is constipation or poop with mucus.

Usually, babies suffering from pylorus disorder fail to gain desired weight or lose weight abnormally. Moreover, they can also get dehydrated with conditions getting worse.

Dehydrated babies are less active than other babies. Also, they might develop a sunken “soft spot on their heads along with sunken eyes and skin appearing wrinkled. Yet another symptom is that they pee less and, therefore, they can stay more than 4-6 hours between wet diapers.

In case of Pyloric Stenosis, the stomach contractions increase usually after feeds to take the form of noticeable ripples moving from left to right over the baby’s belly while the stomach tries to empty itself against the thickened pylorus.

Is Pyloric Stenosis a Matter of Concern?

Surely Pyloric Stenosis is a matter of high concern in infants. It is probably the second highest disease that requires surgery in infants. Since stomach opening gets blocked and babies start to vomit, various problems can occur, dehydration being the most serious one. Moreover, when a baby vomits regularly, he/she doesn’t get sufficient liquids to meet the required nutritional needs. Babies have smaller bodies than adults and, therefore, cannot tolerate loss of fluids as easily as adults. Also, the essential minerals required by the body to stay healthy, like potassium and sodium, also go out from the body with vomits. Babies lacking the appropriate amount of minerals and water in the body can become ill very easily and quickly. Therefore, make it a point to consult your pediatrician at the earliest if you notice any of the above mentioned symptoms in your baby.

7 Useful Tips to Recognize Signs of Anxiety in Children 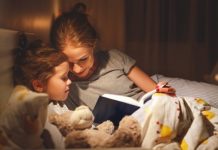 ABOUT US
We, at ParentingHealthyBabies.com, hold your hands as you progress from the preconception stage to pregnancy, child birth,early child rearing and parenting. Happy Parenting!
Contact us: info@parentinghealthybabies.com
FOLLOW US
© © 2019 Parenting Healthy Babies Information on this website is for education purpose only. Consult a medical practitioner for health problems.
MORE STORIES

21 Tips to Keep Your Child Safe This Summer

11 Effective Foods for a Sick Infant (below 1 year)