Nerf guns are perfect gifts for kids who enjoy physical activity and love action movies and video games. With a Nerf gun, your kid can have tons of screen-free fun and play with friends as well. These toy guns tend to encourage competition and improve your child’s motor skills. In this article, we will discuss 11 best Nerf guns to buy for kids in 2020. Read on to find out everything that you need to know about the best Nerf guns this year. 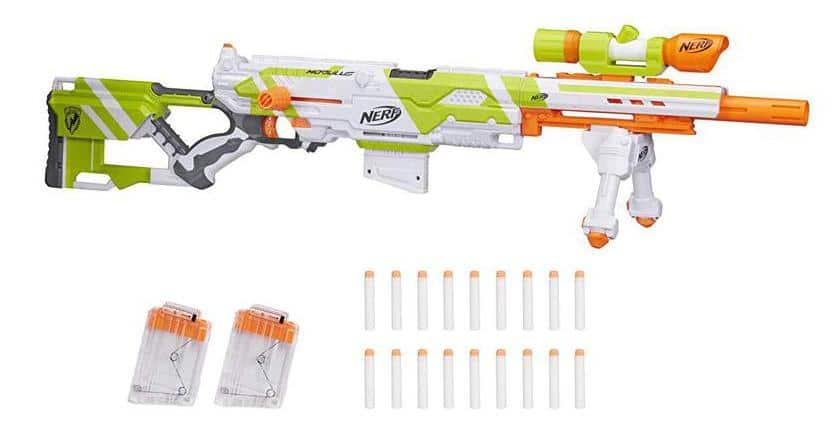 This version of long strike Nerf blaster comes with 18 Nerf modulus Elite darts and 3 six-dart clips, which means that your child will be fully equipped for a serious battle. With this gun, you may load 1 clip in the blaster and conveniently store the other 2 clips in the included shoulder stock, keeping them nearby in case you need the clips immediately. The gun fires 6 darts in a row, which means that this toy gun has immense firepower. This is one of the best nerf guns for kids. 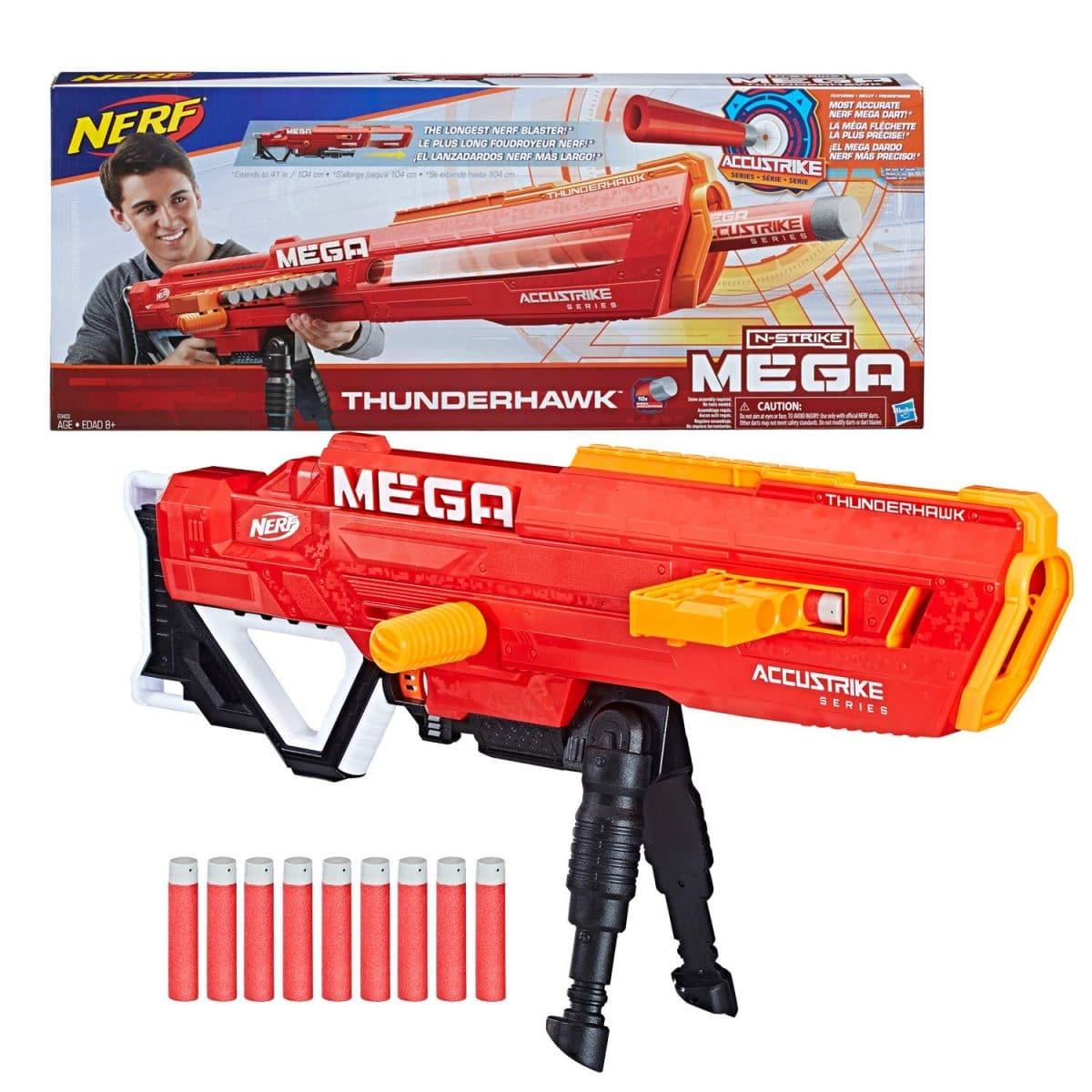 In this gun, the blaster’s length is easily adjustable as you only need to slide the barrel to extend it for distance targeting and then retract it afterward. Also, your child can stabilize the blaster for even more improved accuracy and fold the bipod that attaches the Thunderhawk blaster’s tactical rail. The darts are made of foam. 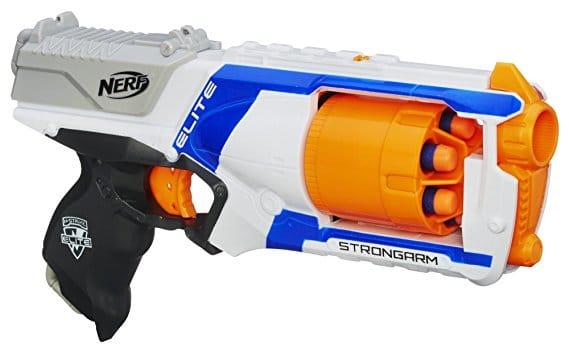 Elite Strongarm Nerf blaster can fire 6 darts in a row as it features a quick-draw, fast-firing system that also allows for great shoot distance of up to 90 feet. The loading system needs no batteries to operate as it’s hand-powered. All the toy’s parts are tested and feature reliable and stable performance. 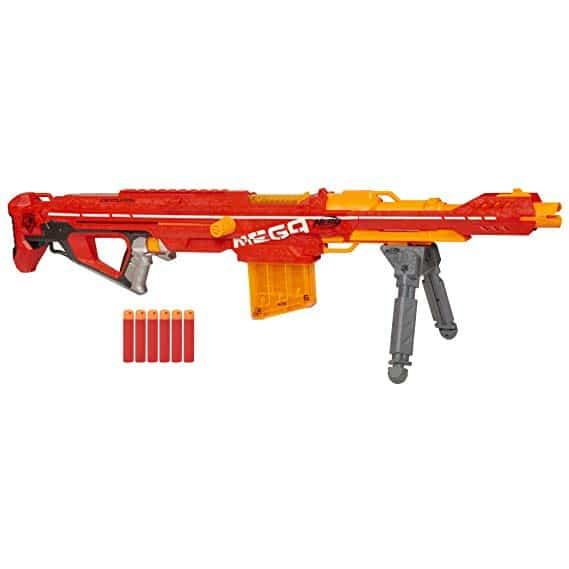 This gun comes with a folding bipod which is meant to be attached to the Centurion Nerf blaster’s tactical rail. Using this Nerf gun, your child will be able to fire darts up to 100 feet as the gun features bolt-action priming fire system. This toy gun also comes with a 6-dart clip and 6 darts that are tested for performance and quality, so you can be sure that this Nerf ammunition will provide you with a reliable and safe performance during play. 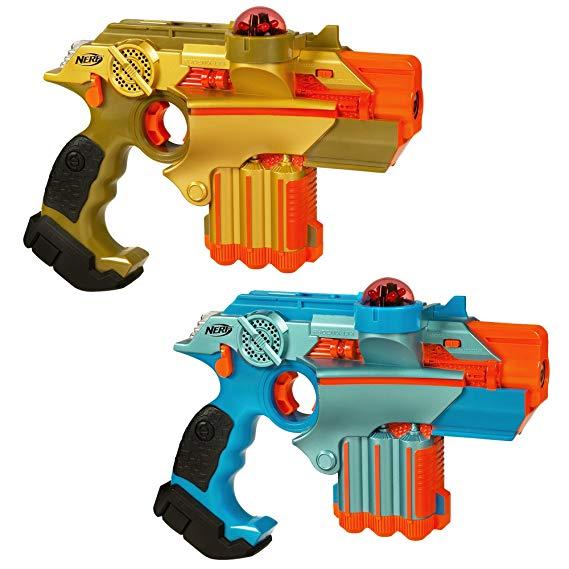 This model is designed for enhanced multiplayer compatibility as the gun set provides you with two laser tag blasters providing the children with tons of fun and activity. The guns are compatible and interchangeable which means that more than two players can play at once. They are suitable for indoor and outdoor battles as they are small in size and ultra-portable. 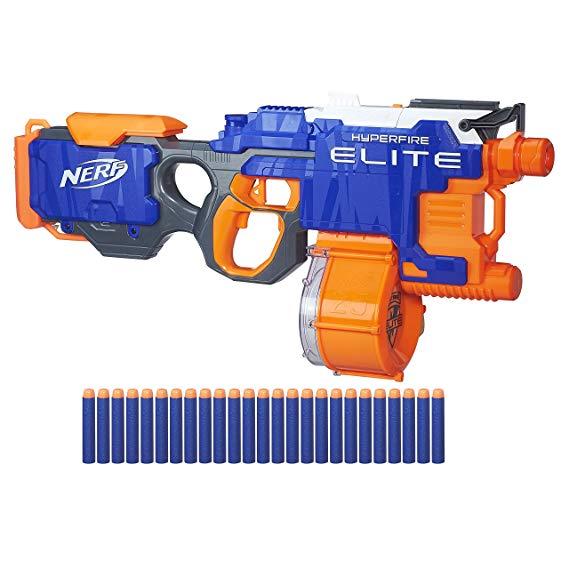 Nerf-N-strike Elite HyperFire blaster comes with the power to fireside up to five darts per second with fresh batteries. The gun features a 25-dart drum which enables you to storm the opponents with Nerf darts and completely disarm them. Also, the gun features an excellent fire range because it can fire darts up to 90 feet. This Nerf blaster comes with 25 Elite darts that feature high-quality and immense durability. The gun comes with detailed instructions that will introduce your kid to the fundamentals of how the gun is best utilized in the battle. If you would like to get this big shot firing, you’ll need 4 D batteries which aren’t included within the set. This is also one of the best nerf guns for kids. 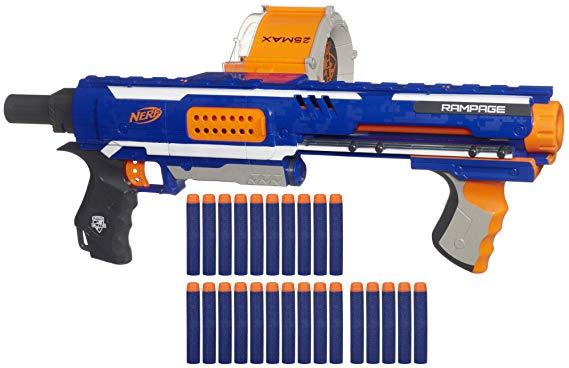 Rampage N-Strike Elite Nerf blaster comes with a drum that can hold up to 25 darts and includes 25 Official Nerf Elite foam darts that provide you with outstanding firepower for Nerf battles. The blaster allows for rapid firing as it features a slam-fire action mechanism that enhances your firepower while you hold down the trigger and slide the handle. The blasting is hand-powered and may go up to 90 feet, which suggests that you simply are going to be on top of things because the blaster needs no batteries to fireside. This means that it’s all up to your kid’s ability to control the gun and uses its fire advantages. 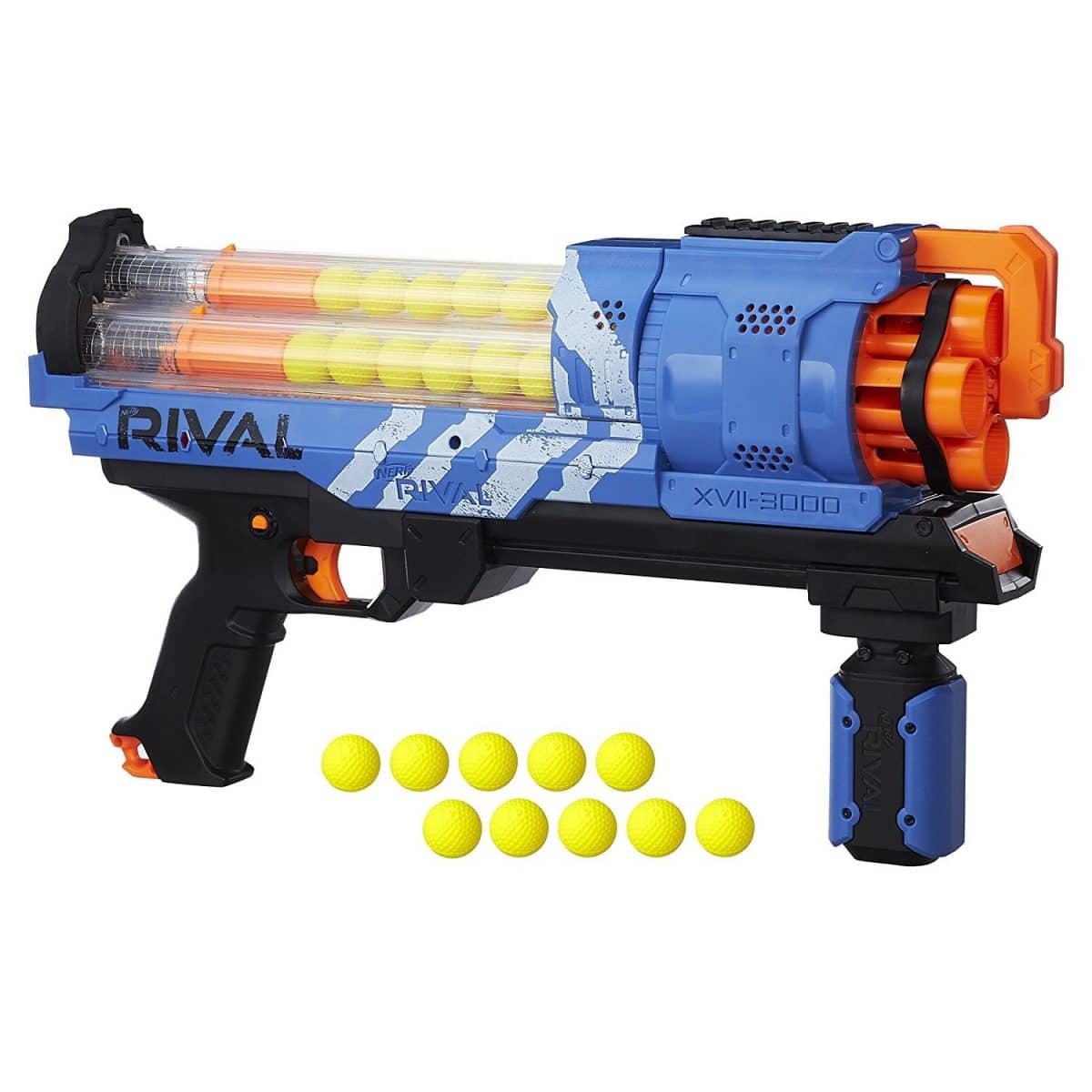 This Nerf blaster comes with a high-capacity charging system which is placed inside the gun and allows for convenient use of the gun. The blaster features a rotating barrel that permits for fast recharge and fast fire mode which is very efficient within the battle. For enhanced firepower, there is a slam-fire option that enables you to surprise your opponents with a rain of Nerf darts when it’s least expected and gain a tactical advantage on the field. The gun comes in set with 30 high-quality Nerf foam ball ammunition and comprehensive instructions which will introduce your child to the fundamentals of this Nerf blaster use. This is also one of the best nerf guns for kids. 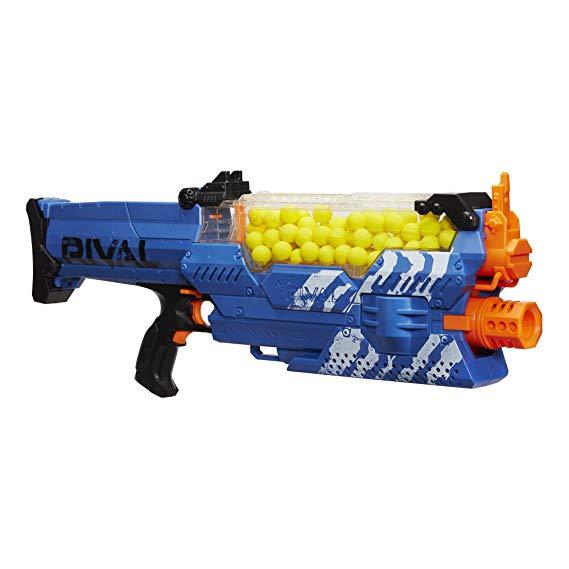 This blaster is fully motorized and comes with enhanced functionality which will surprise you with awesome firepower features. Also, the design of this blaster is great, which means that you will be provided with comfortable use that will benefit your accuracy and the overall fight performance in the battle. The blaster features a high-capacity magazine that is placed inside the gun and which is filled by high-impact foam ball ammunition. The gun comes with a blue or red color design which enables you and your friends to play against each other as Team Red against Team Blue. Also, the gun features enhanced precision and long fire distance. 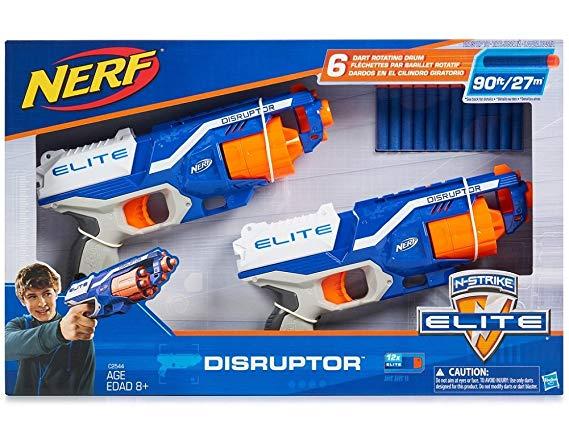 This quality Nerf gun set features two 6-dart rotating drums Nerf N Strike disruptors which are designed to provide you with satisfying firepower and stable performance on the field. With a slam-fire action, this gun has an excellent fire performance which enables you to prove as a worthy opponent during the Nerf battle. You can carry both blasters simultaneously, otherwise you can borrow one to your friend and play with him as a teammate or as an opponent. The guns can fire the projectiles up to 90 feet which suggests that you simply can successfully shoot the opponents form the tactically-important distance. Also, the guns come with 12 Elite darts which passed all the performance and safety tests. 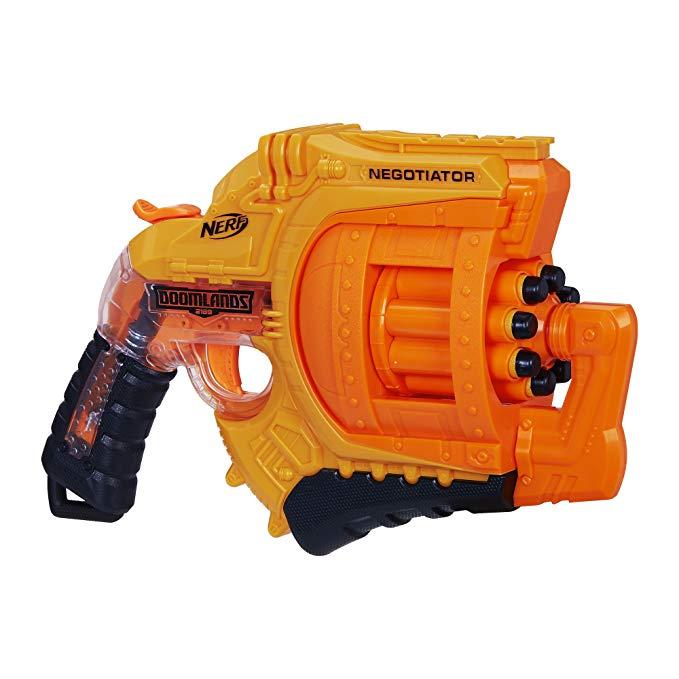 This gun needs no batteries to power the firing mechanism, so everything’s up to your abilities to use the gun’s advanced fire options. This Nerf blaster allows you to fireside 8 darts during a row from the rotating 8-dart drum and surprises your opponents with a moment heavy blast. Also, the gun comes with 8 Nerf darts which are made from high-quality foam and have advanced and safe battle performance. The gun is designed according to the weapon design in the popular first-person shooter game DOOM.

Happy blasting (in a fun way)!