Any sort of bleeding which occurs after childbirth is regarded as postpartum bleeding. Sometimes it is normal. There is a certain amount of blood loss which occurs due to the removal of the placenta from the uterus. Under normal conditions, a woman tends to lose between 500 ml to 100ml of blood upon childbirth. This amount varies according to the kind of childbirth undergone by the woman. In case of vaginal birth the amount of blood loss reaches up to 500ml. In case of a cesarean birth the amount is less. The average blood loss for cesarean birth is about 100ml.

However, in some cases the bleeding does not stop. If it exceeds the specified limits then there must be something serious and you must pursue medical help on an immediate basis. The serious complications, if neglected, can cause exsanguinations or even death of an individual. This is an exclusive list of all the must known facts about postpartum bleeding. Check what is normal and what is not and accordingly seek medical help.

Postpartum periods are physiological process. It occurs due to the removal of the placenta from the uterus. So some bleeding is normal. Since after childbirth the placenta is no longer required, your body automatically rejects it. So whilst the separation occurs the blood vessels connecting the placenta open up.

The bleeding caused by the rupture of the placental blood vessels is known as the postpartum bleeding. However, your body also has a natural way of clotting this blood thereby putting an end to this bleeding. The uterus contracts by itself thereby triggering the process of clotting the blood. Thus the bleeding tends to reduce after a certain time period. However, it might continue for 2 to 6 weeks in very small amount. But you must remember that the initial bleeding will be heavy. It will be much heavier than your normal menstrual bleeding. So, there is no need to panic at the beginning itself. You need to check whether it is reduced to a considerable extend, within the next few days. If it does not reduce then you must consult your doctor on an immediate basis. 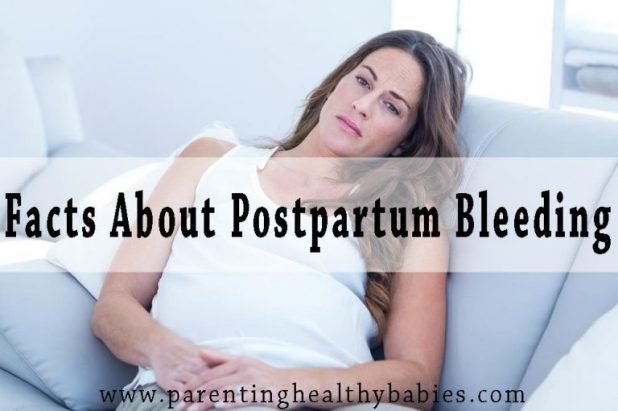 There will be cases where the bleeding will not stop. Anything extending beyond 2 weeks is serious. However, you should not wait for that long before consulting your doctor. Abnormal postpartum bleeding happens as a result of improper contraction of the uterus. Also sometimes a part of the placenta still remains attached in the uterus and the bleeding continuous for a long time. There can be other factors including serious medical conditions, infections, a prolonged labor or a tear in the vagina. The other reason can include factors like trauma to the uterus, cervix of the vagina itself, during the time of the childbirth. Finally, complications can also occur due to some extensive blood clotting disorders you might have been carrying, even before getting pregnant. So the abnormality can evoke from any of these stated factors.

Profuse bleeding is always a sign of abnormality. If your bleeding is not stopping even after a week and the color of the blood is still light reddish, then it is a cause of concern. Sometimes it might get heavier than before. Do not take things causally if you sense that something is not right. Despite the heavy periods and the regular spotting there are few things that will indicate that your postpartum period is not right. Some of the typical signs of things going wrong are bleeding that soaks off an entire sanitary pad, bright red bleeding continuing for four days from the first day of period and blood clots which are bigger than the size of a golf ball. If anything like this occurs you should consult your doctor on an immediate basis.

Continuation of postpartum bleeding is a serious condition. Patients need to be under medication and sometimes hospitalization is also necessary. Sometimes blood transfusions become a necessity for the patients.

Under regular treatments of abnormal postpartum bleeding the doctor checks the condition of the uterus and performs a revision of it. The first step is to check whether there are any unhealed damages in the female reproductive organs ore whether some part of the placenta is still attached with the uterus. It is critical that the reason for the abnormal bleeding is quickly identified. Otherwise, before you know, it might get too late. However, the good news is that whatever the reason is, it is treated with proper medication and ample amount of rest. It is only in some very serious cases that a woman has to undergo a surgical process in order to remove the uterus. But normally, early detection of the issue always ensures an easy recovery.

It is normal to panic about your postpartum bleeding. But you must remember that it is normal. However, considering the fact that neglecting the issue can be fatal, we would suggest you to consult your doctor immediately if any kind of light or heavy bleeding persists after a week. You can check also in case of regular spotting.

Signs and Symptoms of Postpartum Depression

Colace During Pregnancy: Is It Safe?