Metoclopromide, domperidone, risperidone, sulpride and chlorpromazine are some of the prescription drugs used for increasing milk supply.

A newborn baby has only three demands. They are warmth in the arms of its mother, food from her breasts, and security in the knowledge of her presence. Breastfeeding satisfies all three. Adding to our surprise, every baby is not so lucky, as many women can’t produce enough milk to feed their baby. But, relax there are some medicines that can increase the milk supply. Before moving on towards medicines lets know something about galactogogues. A galactagogue or galactogogue is something that can help a breastfeeding mother to increase her breast milk supply. The word itself is a combination of the Greek terms “galact-” meaning milk, and “-ogogue” meaning leading to or promoting. Herbs are commonly used to boost a low milk supply, but certain actions, foods, and medications can help a breastfeeding mom make more breast milk as well.

When necessary, a doctor can prescribe medications to create, or build up a breast milk supply. Medications are often the last resort after the other options have failed. Prescriptions are most helpful if you’d like to nurse an adopted child, or if you want to start breastfeeding again after you have stopped for a while. They are also useful when you’re pumping for a premature or hospitalized infant, and you have a low breast milk supply.

Reglan (metoclopramide) and Motilium (domperidone) are two common prescription medications that may help increase milk production for lactation induction, relactation, and a true low milk supply. Other drugs such as Oxytocin nasal spray, Sulpiride, Thorazine, TRH, and Human Growth Hormone may also have a positive effect on breast milk supply, but they are not as commonly used. 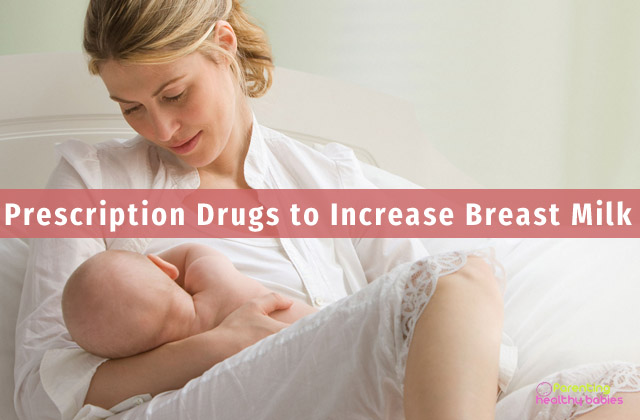 Metoclopramide, also known by its name brand Reglan, is a nausea (antinauseant)and GI medication shown to improve lactation in mothers with low-milk supply, as well as stimulate lactation without pregnancy.

Some of the Metoclopramide side effects include: restlessness, fatigue, diarrhea, anxiety, and severe depression. Anyone taking Metoclopramide who begins experiencing any of these symptoms should consult with their health care provider immediately.

Another GI and nausea drug that is commonly used as a medication to increase milk supply is Domperidone. Also known by its brand name, Motilium, Domperidone is generally considered safe to use as a galactagogue medication..

The few studies performed have found that, while Domperidone does pass through the blood brain barrier, it does so to a lesser extent than Metoclopramide, making it an appealing medication choice for some patients. The side effects recorded with Domperidone use include: dry mouth, abnormal heartbeat, headache, and dizziness. A healthcare professional should be consulted if any of these symptoms are experienced after beginning Domperidone.

Risperidone, or brand name Risperdal, is an antipsychotic medication that is occasionally prescribed for lactation problems.

The studies performed on infants whose mothers took Risperidone have shown no adverse developmental or physical reactions, despite small traces of the medication excreting into the breast milk. The side effects for Risperidone are quite vast, making it a lactation medication that should only be prescribed if necessary. Some of the side effects include: tremors, uncontrolled movements, spasms, fatigue, insomnia, sun sensitivity, anxiety, agitation, and headache.

Another galactagogue medication not approved within the United States is Sulpiride. It is not a commonly prescribed breastfeeding medication because, while studies have shown it does stimulate prolactin, those studies have also indicated that it does little to actually increase milk supply. While it hasn’t shown to cause any adverse effects in infants, it does pass through breast milk in substantially higher levels than what is generally considered safe. Some documented side effects with Sulpiride include: fatigue, headaches, and depression.

Commonly used an antipsychotic medication, Chlorpromazine, or brand name Thorazine, is rarely prescribed for its galactagogue properties. It has been noted to cause drowsiness and lethargy in infants whose mother were on it, which are both problems that can cause further breastfeeding issues. While Chlorpromazine may induce lactation, it should likely not be prescribed for use as a galactagogue except for extreme circumstances. Healthcare providers well versed in lactation should be heavily consulted before beginning a course of Chlorpromazine for breastfeeding.

These drugs are helpful but you should consult your doctor before taking them. He will guide you properly with the benefits and side effects. Drugs should be the last option in your list, inquire about some natural remedies, ask your elders etc. Even they can help. So, be aware and safe and choose your medicine cautiously.

A Beginner’s Guide for GAPS Diet