Hyperdontia is the condition of having supernumerary teeth or teeth that appear in addition to the regular number of teeth. They can appear in any area of the dental arch and can affect any dental organ. The opposite of this condition is hypodontia, where there is a congenital lack of teeth. This is seen more commonly than hyperdontia. The scientific definition of hyperdontia is “any tooth or odontogenic structure that is formed from tooth germ in excess of usual number for any given region of the dental arch”. There can be a lot of teeth or not many teeth and can occur at any place in the dental arch. They may be symmetrical or non-symmetrical. Lets know more about hyperdontia in children.

It is evident that hyperdontia is more common in the permanent dentition than in the primary. The difference between the prevalence of these teeth in permanent dentition in males and females is considerate. Males show hyperdontia twice as often as females. This approximation does vary in terms of location, any other associating syndromes and ethnicity of the individual. In terms of ethnicity, it can be seen that hyperdontia is, in fact, less common in Caucasian than in Asian populations. There is evidence to show that an individual is more likely to have hyperdontia if persons in their family have also got hypodontia.

Facts About Hyperdontia in Children 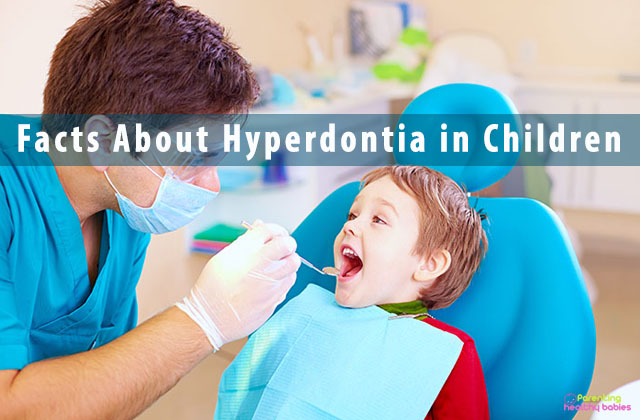 Causes of hyperdontia in children

There is evidence of hereditary factors along with some evidence of environmental factors leading to this condition. While a single excess tooth is relatively common, multiple hyperdontia is rare in people with no other associated diseases or syndromes. Many supernumerary teeth never erupt, but they may delay eruption of nearby teeth or cause other dental or orthodontic problems. Molar-type extra teeth are the rarest form. Dental x-rays are often used to diagnose hyperdontia.

Hyperdontia may be seen in a multitude of syndromic conditions such as cleft lip/palate, craniofacial dysplasia, gardner syndrome and sturge-weber syndrome.

The presence of a supernumerary tooth, particularly when seen in young children, is associated with a disturbance of the maxillary incisor region. This commonly results in the impaction of the incisors during the mixed dentition stage.

Read More: Are Baby Teeth as Important as Adult Teeth?

Symptoms of hyperdontia in children

The main symptom of hyperdontia is the growth of extra teeth directly behind or close to your usual primary or permanent teeth. These teeth usually appear in adults. They’re twice as common in men than they are in women.

The dental stone model shows mesiodens and accessory tooth behind right central incisor. Supernumerary teeth can be classified by shape and by position.

Classification of supernumerary teeth by shape

Classification of supernumerary teeth by position

When classified by position, a supernumerary tooth may be referred to as a mesiodens, a paramolar, or a distomolar. Occasionally, these teeth do not erupt into the oral cavity but manifest as a malocclusion.

The most common supernumerary tooth is a mesiodens, which is a malformed, peg-like tooth that occurs between the maxillary central incisors.

Fourth and fifth molars that form behind the third molars are another kind of supernumerary teeth.

Treatment of hyperdontia in children

The best treatment for hyperdontia is its removal. Although these teeth are usually asymptomatic and pose no threat to the individual, they are often extracted for aesthetic reasons. This is done particularly if the mesiodens is positioned in the maxillary central incisor region. The traditional method of removal is done by using bone chisels, although a more advanced technology has been found to be more beneficial, especially if surgery is required. Through the use of Piezoelectricity, Piezoelectric ultrasonic bone surgery may be more time consuming than the traditional method but it seems to reduce the post-operative bleeding and associated complications quite significantly.

Supernumerary teeth may be detected by taking two different x-rays at different angles. Examples of this may be an intra-oral X-ray (one that is taken inside the mouth) and a panoramic radiograph. However, these x-rays are 2D and therefore do not accurately portray the 3D view of the teeth.

Given below is the average number of teeth a child should have in accordance to his age. If you find a difference in the number, it is recommended to visit your doctor immediately.

11 Ways to Control Junk in your Kid’s Life

15 Must Have Green Vegetables in Your Child’s Diet