The complications range from re-hospitalization, medication, blood transfusion. It can also result in partial amputation of the penis. Sometimes repeat surgeries cause death to the infant. There are more than thousands of documented cases which signifies the risks and dangers of circumcision. This article in particular will discuss the risks and the complications associated with circumcising a baby boy.

Bleeding is perhaps the most common problem associated with circumcision. On occasions the bleeding can be stopped by the help of clotting agents. However, severe bleeding can cause a fatal heart arrest and eventual death of the child.

For that reason, bleeding should not be taken lightly. The devices used for circumcision have features which can help them to clot the blood. But sometimes they fail to crush the tissues to the desired extent. They fail to stop the bleeding. That is when the risk of profuse bleeding gets exposed. The blood clotting disorders tend to increase the risk of bleeding during circumcision. Abnormal bleeding can even cause hemorrhage in your child. If the bleeding does not stop within 5 minutes of the process the risk persists.

Infection is the second most common complication associated with circumcision. Your child is yet to develop its immune system. That is why the risk of infection is prevalent. The contamination of the open wound to urine and feces remaining in the baby’s diaper causes localized infection in the baby’s penis. However, it can be the root of other serious and life-threatening diseases.

Research shows that the chances of infection are 5 times more in when a Plastibell device is being used. The chances are less in case of a Gomco clamp. Serious localized infection in the penis includes scalded skin syndrome, erysipelas and necrotizing fasciitis.  Fournier’s gangrene, and impetigo and other diseases are also a possibility.

Apart from the localized short-term infections there are other risks of other complications. Infections like in the form of tetanus, diphtheria, bronchopneumonia and jaundices are also common. Some suffer from syphilis, tuberculosis and also chances of herpes. Infection can even lead to the death of the infant. 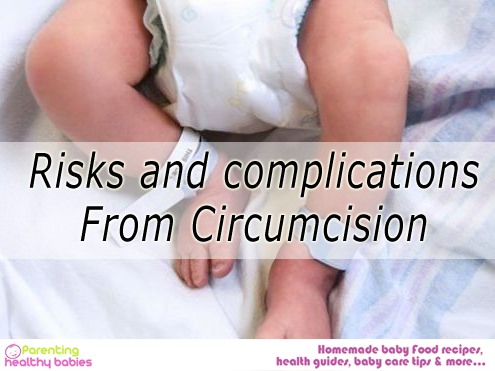 Babies have the capacity to feel and also remember pain. That is why repeated exposure to pain can cause psychological problems for the child. This continues in the later on in his/her life. According to American Academy of Pediatrics extreme pain in the childhood can trigger altered brain development. It can also affect the neuron development of the child.

No matter whether or not anesthesia is being used pain is itself an outcome of circumcision. However, local anesthesia used for blocking pain can also have some serious adverse affect. It damages the overall penile health of the child. Some of the pain relieving local anesthetic used in case of circumcision can trigger more hemoglobin in blood. It also decreases the availability of oxygen in the local tissues.

Excessive pain can cause gagging and chocking of your child. Vomiting and other extreme reactions are also natural.

Removal of Inappropriate Portion of Skin

One of the major risks of circumcision is removal of too much skin.  This results in the partial or the total removal of the penile shaft. This opens up the necessity of skin grafting. This risk is more predominant when Gomco technique is being used. In such cases the chances are that, too much skin is being pulled by the device. Removal of too much skin can also cause a tight and painful erection. This will create problem later on in the child’s life.

Circumcision can damage the urethra of your child. During the dorsal slit phase of circumcision the blade of the instrument can be accidentally placed on the urethra. This results in damaging it permanently. This is a very fatal risk as far as circumcision is concerned.

Complete amputation or the even the partial ones can cause serious complications, later on in the lives of the children.

If the clotting material in the form of bandage is too tightly wrapped, around a freshly circumcised penis then risk of urine retention prevails.  There are chances that some amount of urine’s will get remain retained within the urinary tract. This causes serious life-threatening diseases like bladder rupture and acute renal failure.

It is another complication which is associated with circumcision. It is an inflammation in the urethral opening. The foreskin protects this opening. However, regularly changing the diaper of your child can possibly reduce this risk. The symptoms include narrow and high velocity urine stream associated with pain and difficulties of urination. It opens up chance of serious urinary tract infections.

Phimosis is a condition where the skin remaining after circumcision entraps the glans and causes serious complications for the child.

Buried penis occurs when the penile shaft, fails to come forward by the help of the attachment between the inner foreskin of the child’s penis and the glans  It  retracts back causing a buried penis syndrome. This is yet another serious complication of circumcision which can affect the lifestyle and health of the male child, later on in his life.

Death is certainly the ultimate risk of the process of circumcision. However, sometimes considering the life-long serious ailments that the process can result, death can be legitimately acceptable outcome by the victim.

The risks and complications of circumcision outweigh the potential benefits. The surgery itself is unnecessary. It exposes the risk of serious life-threatening diseases. Since there is always a chance that the child’s penis and urinary tract might get damaged permanently and can even cause his death, the practice of circumcision is unethical.