Games if any kind have always been a delight for kids. But, not all games fulfill all purposes. Any physical sport may not sharpen your mind that well. So,let’s put forward you a list of some very int games that can be a source if enjoyment as well as a brain booster.

Board Games: 31 Best Games for Children 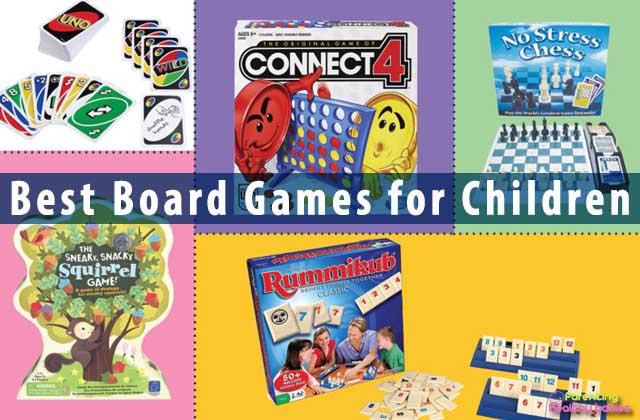 This game has so much in store for kids. It has something exciting at each stage. You have to move your piece and solve a mystery orelse the pigs eat your food.

Well, it’s a simple game where you reveal one card and then another and whoever spots the common symbol wins the turn.

It all about the ‘sneaky squirrels’ and the ‘wind’ icons. If the spinner points at ‘sneaky squirrel’ you can sneak an arcon from your opponent, orelse you return all that you acquired.

I’m sure your kid must be afraid of the hissing of a snake. Well, it’s time to withdraw that fear and let your kid make the biggest snake he can.

This game is of great help in improving your kids sharpness and intellect. Kids get excited with the mere knowledge about the various rules of the game.

It’s a quite great a game for fun loving kids. They can grab lots of fun and memories, matching pictures, simply the player with the most pair of similar pictures wins.

Colour and number matching will surely be loved by your kids. Uno is undoubtedly one of the best family card game and even kids can play it with ease.

This spy game is an amazing combination of beautiful photographs, familiar objects and rhyming riddles which will guide the kid to solve the puzzles.

It’s a great classic game. The best thing about this game is that it it tests your kids brain power. The more strategic they are the better there mind develops.

This game is not winning individually but to work with your friends to collect all the owl around the board or in their nest before sunset.

This game seems simple but it’s the best way to improve cognitive, logical and spatial reasoning skills as well as visual perception of your kids.

I’m sure your kids love candies, they will love this amazing game as well. They just have to pick a card and move closer and atlast reach the coloured spaces. They are many twists and turns in the game to inthrall your kid.

This interesting game consists of a map of United States and every player is assigned a route which he has to complete to reach the destination. Quite interesting, isn’t it?

This game is full of fun and excitement. Your kid can put his speed at test by creating new sets quickly as well as stealing the sets of the others.

This game is as simple as that, you need to get the cards and you have to build words. It’s the best game for a your kid’s birthday party as it involves large number of players.

Tell me a story

Well, if you kid loves superman or fairy princess. You can always buy this game which has different pictures on it. Just pick up your kids favourite cartoon character and let him/her have fun with these cards.

It’s a game based on tiles which involves two to four players in a go. The rules are very simple to understand so it’s best for kids.

Your kid can play this in a pair or a group of four or six. You just have to fill all the triangles with your colored pegs. But, it’s not that easy as it seems. Let you kids figure it out themselves

How about getting lost in a maze  and draining your brain in finding the way out. Yes, this game is all about finding the shortest way out of the maze.

How about putting the strategic mind of your kid to test. This strategy game which is meant for two to four players can help you to  know about your kids stratergic side.

Unlike other card games this card game has five suits. The diamonds, spades, hearts, clubs and the stars. It is a beautifully illustrated set if cards, just the favourite for students.

This game is a matching game wherein kids match the similar pictures and words to their challenge cards. It will be fun to see who completes the task first.

It’s an interesting game where two teams are aware of the code names if their 25 agents. They have to just find out their agents. Quite tricky, but very interesting.

It has a spring loaded crossbar.

It is full of surprise and suspense, You just have to pick up one of those pressure packed cross bars and see that you get.

This game will surely make you kid have a superhero feeling. As the kids need to team up to find the cures of the four diseases that have spread in the gaming world with help of some clues.

It’s a game related to tile-placement. It’s like a complete adventure kit with an interesting setup and storyline.

Who doesn’t know about or which kid doesn’t like the snake and ladder game. It’s modified name is chutes and ladders. Just drivel the dice and see if you are going to be welcomed by a ladder or a snake.

This board game has a setup of an island and your kid and his friends need to move their pawns around the island and save the island from sinking. Interesting?

How about testing your kids vocabulary. Well, this words game involves making new words by joining letter by letter per tile. It has a 15×15 tiles grid.

Kittens are indeed very cute, but this game is not as such. It is a highly strategic game. So, your little one will have to apply lots of brain. It’s worth it.

The game of life

This game presents a whole picture of life to the kids. It takes the kids to the possibile stages of life  from college to retirement, with jobs, marriage, and many more facets of life.

So, this was a list of some very interesting games for you kid to apply his brain, have fun and learn many more things. As parents it becomes your responsibility to figure out which game is the best for your kid. Happy parenting!