The excitement of finding out the gender of the little one can never be eclipsed by any other emotion. Doctors generally reveal the gender of the baby within 6 months of the pregnancy. Thus it is an essential part of the parenting journey to celebrate each and every moment creating memories out of them. Gender revealing parties and ideas are the most trending sensation not only on internet but virtually as well. Here are some unique gender reveal ideas to guide you and make your gender reveal party a huge success. 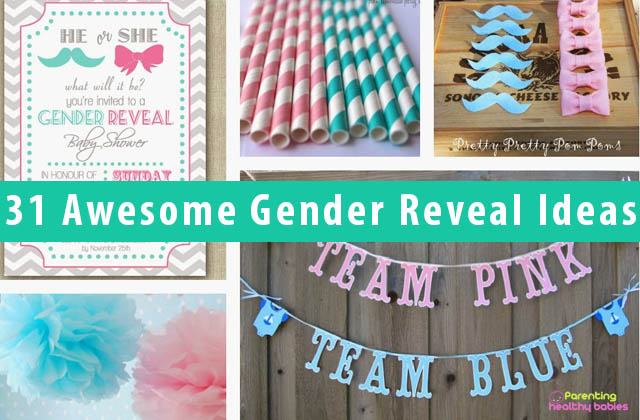 Confetti gender reveal is the most popular form of party idea. Confetti’s can be easily arranged and customised confetti crackers are available in the market.

Darts and balloons filled with glittery pre-allotted colour is a trendy idea for revealing the gender of the baby to the family and at times the spouse as well.

Fireworks, the word itself suggest celebrations and what better an occasion than the gender reveal of your baby

Fill the piñata with the desired gender goodies or if it is a surprise for the expecting parents also, get the piñata customized and the see the happiness that splatters on the faces of all.

Well why not make your guests work to know the good news? Design a treasure hunt that leaves behind clues to reach the next stage. The ultimate gift would reveal the gender of the baby.

Planning for a big gender reveal? Then rope in the biggest truck and fill its pipes with the colour coordinated for the baby and see how it reveals the gender of your baby with the blow of its horn.

Goodie boxes can be gifted to the parents that have customized memories of the life of one parent. If it’s a baby girl then take the mother down on a memory trip and vice versa for a baby boy.

Get a colour dominating puzzle prepared for your baby and let the grandparents work hard to know the gender of their next successor.

Use pink or blue coloured icing on your cupcakes and present them to the mother as a surprise to curb her anxiety and give her all the happiness she deserves.

A simple colour dominated baby onsie can be used for a good gender reveal during the party.

Prepare or get prepared the nursery of your child keeping in mind the gender of your baby and see the fun enrapture.

Want to know the gender of the baby? Then go ahead and scratch the card.

Make a small punching bag filled with coloured sand and both the parents can box out the answer.

Baby shoes are the cutest commodity available in the baby world, so why not use them to reveal the gender of your baby.

Every mother is a queen so give her the perfect sash to compliment her beauty and reveal the gender of the baby.

Make use of banner and subtle signs to drop hints on the baby’s gender and let the relatives guess it for you.

Fill the umbrella with confetti and coloured glitter and gradually invert the umbrella showering the parents with this new blessing.

Paint fight and paint tubs can be employed to reveal the gender of your baby but also as a good party theme to make it more fun and interesting.

Enhance the ultrasound picture and share your happiness with all.

A good option is reveal the baby’s gender on a New Year eve with the aid of the countdown to reveal the gender of the little one.

Ice cream buckets are a personal craving of every expecting mother. Use the same for a small personalized gender reveal party at home.

Involve everyone in the thrill of guessing the correct gender through these guessing pins and gradually let them know who was correct.

For army fathers parcels reveal bring a new sunshine to the otherwise violent world. Fill the box with goodies and give them the best surprise of their lives.

Sporty fathers and mothers can kick rugby or baseball to reveal the colour stored inside and declares the gender of the baby.

Fill the champagne bottle with coloured wine and raise a toast to the new life.

Attach colour filled balloons to the neither ends of the weights and drop them from a height. See the colour will add new phases to your life.

You can order tailored candles that have a line of the baby colour in between. When the candle will melt the secret to the baby’s gender will also melt away.

If you have pets at home this method is the best for you. Train your dog to carry around a basket from before and on the final day add small treats that reveal the gender of the baby.

Order a bouquet or a trendy flower decoration for the parents to be that will fill fragrance and beauty in their future life.

Make use of the famous Tokyo Drift style and see how fun and thrilling your gender reveal becomes.

Plant multiple pluck cards all around the house bind them in an envelope making a special mark on the correct gender choice. The one who finds the correct pluck card first gets a chance to announce the good news to the family.

Thus here were some of the most unique gender reveal ideas to make you cherish every memory associated with the little angel.

Sitz Bath after Delivery: 11 Benefits Every New Mom Should Know

21 Easy and Quick Recipes Kids Can Cook During the Lock...