Suffering from acid reflux and pregnant and know not what to do? Help is at hand. Understand what the condition is all about, and how you can tackle it with ease.

Acid reflux is commonly known as heartburn or indigestion disorder. This is a very common condition in which one experiences a burning sensation in the lower chest. This happens when the stomach acid flows backwards into the food pipe.

This happens when you eat very oily or spicy foods. When pregnant women experience acid reflux, it is usually a persistent problem, beginning in the first trimester.

When pregnant women experience acid reflux, it is normally due to a range of physical changes. Some of them are hormonal changes, such as an increase in hormonal secretion which contributes to increasing gastric acid in the abdomen. This leads to acid influx in the stomach that is accompanied by a burning sensation. Though heartburn is common during pregnancy, it lasts only for the duration of the first trimester of pregnancy.

What really happens during pregnancy is that hormone changes that women undergo allow the esophagal muscles to relax oftener. Consequently, more acids may flow back upwards, particularly if the pregnant woman lies down or after she has eaten a big meal.

Additionally, as the foetus grows during the second and third trimesters, the uterus expands to make room for the baby, putting the pregnant woman’s stomach under greater pressure. This pushes back into the oesophagus any food eaten and stomach acids. 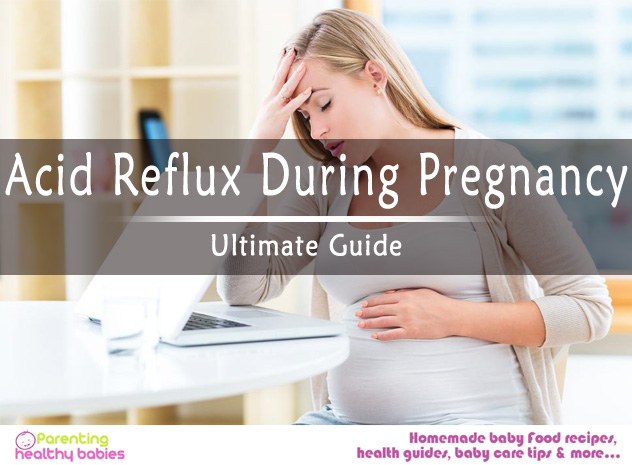 Though heartburn and regurgitation are the main symptoms of acid reflux, there are other acid reflux symptoms like bloating, black stools, burping, hiccups, dysphagia and hiccups.

Is pregnancy a factor for acid reflux?

If you get acid reflux during pregnancy, do the following as outlined below:

Read More: Can a Chiropractor Help with Reflux in Infants?

Pregnant women can be treated for acid reflux either with certain medications, making dietary changes and/or by adopting some lifestyle changes.

Pregnant women suffering from acid reflux can take these medicines on their doctors’ advice:

Certain lifestyle changes can help solve the problem of acid reflux among pregnant women. Some of these are: