Women with twin pregnancy require time to deliver them at the right time. They undergo a higher risk of delivery when compared to normal single baby delivery. Risks associated with early arrivals as well as a longer stay of the fetus in the womb need to be minimized. Normally, pregnancy lasts for about 40 weeks and babies delivered after 37 weeks are considered full-term babies. Preterm delivery often results in causing breathing difficulty and trouble in digesting food as well as long term complications like impaired vision, hearing defects, and cognitive skills as social problems.

Twin delivery has almost 13 times more chances of stillbirth than normal single baby delivery. Twins are delivered at 37 weeks to avoid stillbirth and newborn deaths. Though it is advised to continue the pregnancy until there is no chance of stillbirth or any other complication.

A Guide for 34 Weeks Pregnant with Twins

Fetal Development of Twins at 34 Weeks

Around 34 weeks, twins are growing and the womb size is not enough for their cartwheels. This results in variation in fetal movements. During this time of pregnancy, the babies are drooping deeper in the pelvis and are getting ready for delivery as early as 34 weeks or in the upcoming week. Ultrasound helps in determining the development of twins. The positioning of babies inside the womb is continuously monitored by a doctor from 34 weeks onwards. In case of an ideal position, normal delivery can occur but if the invariant position the doctor may go for cesarean delivery. 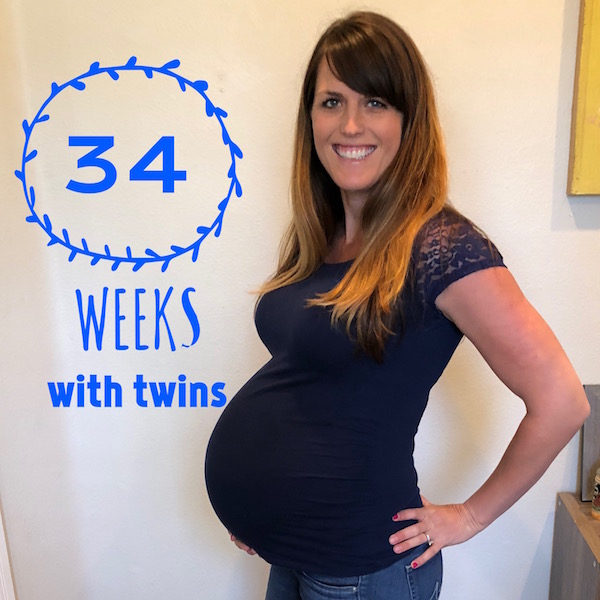 Size of Babies at 34 Weeks

A good ripe squash fruit resembles the size of the twins in the womb at 34 weeks of pregnancy. The fat content of the twins keeps on increasing as is reflected in their weight. Maximum babies tend to weigh about 2 kilograms till now and it becomes difficult for mothers to carry. Their length also increases and by this time they are about 45 cm. The uterus cannot provide sufficient space for the babies to grow.

Symptoms or Changes Around 34 Weeks of Pregnancy

At 34 weeks of pregnancy, the pregnant woman’s body is under more physical as well as mental changes along with the growth and development of the babies. These changes are :

Ultrasound is a must to check the health of the babies to have a safe delivery. With ultrasound, the birth process analysis becomes easier. Along with it, several tests are also conducted to ensure the development of babies.

Is it Safe to Deliver Twins at 34 Weeks?

Twins delivered at 34 weeks are often considered as moderate to late preterm. Any delivery before 37 weeks is called preterm delivery. The twin born at 34 weeks requires help to learn to regulate the temperature and may have breathing difficulty on their own. They require kangaroo care I.e. skin to skin contact to regulate their body temperature.

How Many Weeks Twins are Born Usually?

According to doctors, the best time for delivery twins is between 34 to 39 weeks. This is dependent on whether the twins share a single placenta. It has been observed complications like seizures and respiratory distress were reduced if delivery took place in the later stage of the gestation.

Labor contractions in twin pregnancy initially feel like menstrual cramps and later they intensify. Later, these contractions feel dull pain along with pelvic pressure. The discomfort moves about from top of the belly to the bottom.

Are Babies Fully Developed at 34 Weeks?

The brains of the babies are fully developed till now. They are all curled up with the knees resting on their chest and are ready to get delivered. The baby is now covered with vernix, a waxy white coating that protects the baby from amniotic fluid but acting as a lubricant which helps baby move through the birth canal easily.

What should a Pregnant Woman Eat?

The diet should be strictly maintained and should contain fibrous food. It should also be rich in protein. If the woman gains more weight ṭḥaṇ expectated then it is better to visit a doctor and make specific changes in her diet to control the weight while maintaining the initial requirements of the babies.

Every mother’s experience is different during pregnancy, but she should be able to focus on the development of her babies. Twin pregnancy requires more effort than a single baby pregnancy. Women should take proper rest and eat well for the normal healthy growth of their babies.

11 Home Remedies for Headache During Pregnancy

7 Easy Yoga Poses for Pregnant Women to Boost Immunity and...