Do you suspect your teen is suffering from Anorexia but aren’t very sure? Listed below are a few tell-tale signs and symptoms that your teen may need help and support from overcoming this condition. Read on for more!

Anorexia nervosa is a psychological eating disorder delineated by extremely low body weight relative to BMI, illogical fear of weight gain, as well as a distorted perception of self-image and body. This psychological disorder is more common among teens and young adults.

Eating disorders can occur among people of any age. However, these disorders are difficult to be diagnosed among kids and children. Adding further, many teenage girls and boys go on diets to lose weight, but quit dieting after a short time period. If you are a guardian or a parent, it is important to seek professional help and distinguish occasional dieting from the initial symptoms of eating disorders. Also, it is important to be alert with eating patterns and beliefs that indicate the beginning of an unhealthy behavior. 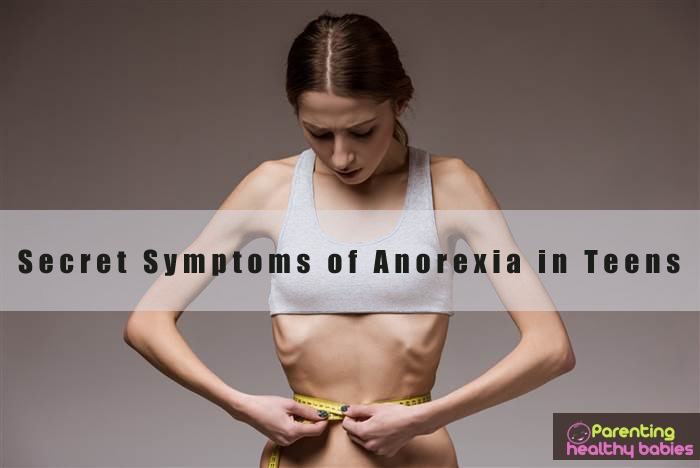 Anorexia Nervosa refers to a disease wherein teenagers are obsessed with food, body, and being thin. This obsession, sometimes, reaches to the point of deadly self-starvation. This condition might result in excessive exercise or simply not consuming enough food to meet the daily requirement of calories.

The symptoms of anorexia can be divided into different categories, viz. physical, emotional, and behavioral.

The physical symptoms of anorexia include:

The emotional symptoms of anorexia include:

Red Flags to Watch out for

It might get difficult to notice the symptoms and signs of anorexia in teenagers for they often disguise their thinness, eating habits, and physical problems.

If you are concerned about a loved one suffering from anorexia, here are some more serious symptoms that are marked as RED FLAG and need to be taken care of.

Causes of Anorexia in Teenagers

The causes of anorexia in teenagers are not very certain. Just like other behavioral disorders, anorexia also occurs as a result of a complex interaction of psychological, genetic, family, biological, environmental, and social factors.

Some of the most possible causes of anorexia in teenagers are:

Some teenagers might be vulnerable to develop eating disorders genetically. As indicated by research studies, teenagers who have biological siblings or parents with eating disorders might be predisposed to develop the same problem. However, there is a lack of evidence that serotonin, a mood controlling brain chemical, works to influence a brain chemical associated with mood thus influencing abnormal eating behaviors due to its additional connection to the regulation of food intake.

The all popular media usually cultivates and reinforces thinness as the image of an ideal body shape. The entertainment and media industry usually focus on outer appearance and body shape. For teenagers, with a predisposition towards an eating disorder, it is easier to believe that worth and success is commonly equated with being thin. Sometimes, peer pressure also fuels the obsession, especially among teenagers.

Any teenager with anorexia nervosa may have emotional and psychological factors contributing to the condition. These factors include perfectionism, low self-esteem, family conflicts, anger-management difficulties, and troubled relationships.

With all the symptoms and causes of anorexia in teenagers, it is important to consult a doctor or a counselor at the earliest to avoid severe consequences.

Best Age to Get Pregnant: All You Need to Know About

Breastfeeding Your Toddler: Pros and Cons