Christmas is around the corner and we can already hear bells jingling in our minds. The festival is truly one of the happiest moments of the year. It brings with itself feelings of joy, and a community spirit. It fosters in us the joy of giving. Children and teenagers especially love christmas, since it involves lots of food, lights, gifts and most importantly, christmas parties and christmas games.  Christmas is truly a time for constant parties, but while hosting a christmas party for teenagers, it can be slightly difficult to think of how to keep them occupied. In today’s day and age of immersive phone screens, christmas games that do not involve mobile phones and make everyone play together can be a great way of bringing laughter, happiness and a feeling of togetherness, especially among teenagers. 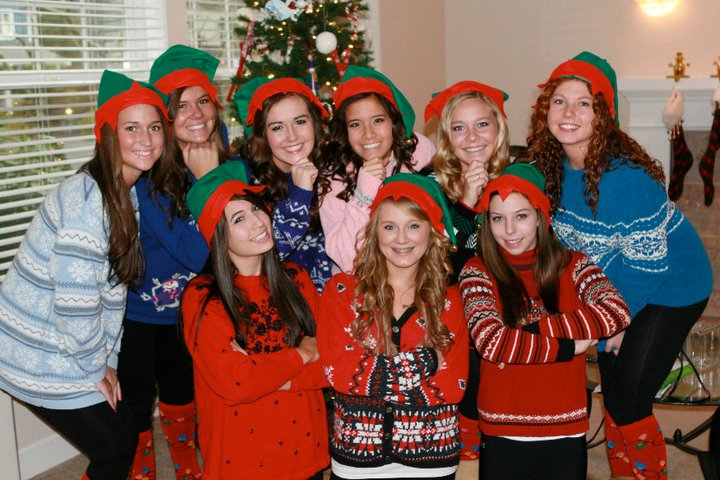 Christmas has the long tradition of hiding presents inside stockings. This can lead to a fun guessing game.  You will require –

To play this game, you can put small christmas related items inside stockings. A team must touch the stocking and guess what is inside it. Then they can write down their answers on a piece of paper and give them to you. The team who answers correctly the most number of times wins! This game can be played with both small groups or large groups, as long as they can be evenly divided.

The classic game of pictionary, with a christmas-y twist! Just divide the teenagers into groups, or play the game individually. Each party is given the name of a christmas carol, which they then have to somehow draw on a piece of paper. Their team or the rest of the players have to guess based on their drawing. Assign scores accordingly. The person or team with the most scores wins.

Write down a bunch of questions related to popular christmas movies prior to starting the game. These can be simple trivia questions about movies like elf, home alone or a christmas story. The one who answers the most number of right answers wins the game! This game can also be played in teams.

Christmas carols are a big part of christmas, and can be easily incorporated into christmas games for teenagers. Just play the first few notes of a popular christmas carol and let the individual player or team guess the christmas carol.

With a crazy and fun twist on the classic relay race, this christmas game for teens brings laughter and silliness to every christmas party. The way this christmas party game works is by first accumulating the things needed to play. This includes cotton balls, vaseline or some other petroleum jelly, a wide-mouthed jar and a couple of players.

To play, the teens are divided into teams and made to stand on one end of the room. On the other end of the room is placed the wide-mouthed jar with cotton balls inside it. The teens coat their chins and cheeks with vaseline. The team whose turn it is to play starts by sending one player who must go racing to the jar and try to stick as many cotton balls on her face as possible. Then the next player must do the same. The team with the most number of cotton balls wins.

Santa’s hat is a very fun game that isn’t really a formal game. It is a way to have fun even before the christmas party games have officially started. All you will require for this game are a large number of santa hats. Every guest gets a santa hat when they enter the party. While giving it to them, tell them that they must keep it on until they see you taking yours off. Once the party begins, subtly take off your santa hat. The person who first notices you and takes off his own hat is declared the winner.

For this christmas party game, you will require one present, wrapped in several layers of wrapping paper. The teens must sit in a circle. You start playing a song on the radio or on your phone, and as soon as the song starts, the first player must start unwrapping the first layer of the present. Then he passes it on to the next player on his left who unwraps the second layer. Stop the song in the middle. Whoever is holding the present when the song stops is eliminated from the game. The circle becomes smaller and the game is resumed. The last person to remain is the winner.

This is a fun game where all you need is a drawing of rudolf large enough to hang or stick on the wall. Then you need a round, red sticker precisely the size of rudolf’s nose. Every participant must look at the drawing and is then blindfolded and made to spin in circles for a moment so he loses his sense of direction. Then he must attempt to paste the sticker correctly on rudolf’s nose.

Taking the roots of the classic game of bingo, make some easy bingo cards but instead of numbers, write down names of things related to christmas like “santa claus” or “presents” or “cake”. Distribute the bingo cards among the teens; call out the names of the items as bingo master and then the same rules of bingo apply!

A game to help the teens discover their imagination, this christmas party game is simple without any sort of things needed. The teens sit in a circle and pick up a chit from a bowl. Each chit has an opening statement, preferably something to do with christmas. The first teen reads the opening statement, and then the others continue the story one after the other, each person adding one line.

This fun christmas party game for kids of all ages only needs a few cups, and a handful of colourful bells or decorations. The game challenges the kids to toss the bells into the cups from a distance. The person who gets most number of bells inside the cups wins the game.

This christmas party games for teens is very easy to make. All you need is a few white cups, on which you draw a snowman face. Stacking these cups on top of each other in the shape of a pyramid, you give the player a few rolled up socks. They must try to knock down as many snowmen as they can with the amount of socks they have. The person to knock down the most number of snowmen wins.

You can put a fun spin on the classic game of scavenger hunt by placing a little reindeer figure anywhere in the house and making little clues about how to find it. You can include riddles and puzzles as clues. This fun game will make the teenagers work together and have a lot of fun.

A christmas-y take on the fun game of simon says, this game is for the younger teens. The rules of simon says would apply, but make sure to include as activity, things that santa would do like climbing a chimney.

In this christmas party game, the teen would wear gloves or mittens on his hands and then try to unwrap a chocolate or candy. This can also be amended to unwrapping a present. The child who unwraps the most number of candies wins the game.

This game requires you to pick eight christmas themed pictures and bring two of each in the size of cards. Place these cards upside down in a 4×4 layout. The player picks a card, and then tries to find its match. If he does, he gets to keep those cards, gets points accordingly and tries to find another match. The person who reaches the predetermined winning score first wins the game.

Pick a christmas themed object and have the rest of the players guess the object that you’re thinking of.  They can only ask you 20 yes or no questions to help them guess. A fun twist on the classic game of 20 questions!

One player describes a christmas scene and the other tries to draw it with a marker on a piece of paper. The catch? The player drawing the scene is blindfolded! The team with the most accurate drawing wins the game.

This is a game quite like dumb charades. In a bowl, put a number of chits, each containing scenes of a christmas-y nature. For example, “kids opening presents” or “santa climbing a chimney”. You can get as creative as you like. After that, the players have to pick up a chit and act out the scene. The others have to guess.

Shovelling snow outside might not be so much fun, but this christmas party game definitely is! All you need is cotton balls, spoons, and bowls. The teen must pick up cotton balls with his spoon that are scattered around and place it into a bowl. The one who clears up the most number of cotton balls wins the game.

This is a fun game where kids compete to stack a bunch of gifts on top of each other. Two players can compete at one time. The first person to finish stacking his gifts without them dropping is declared the winner.